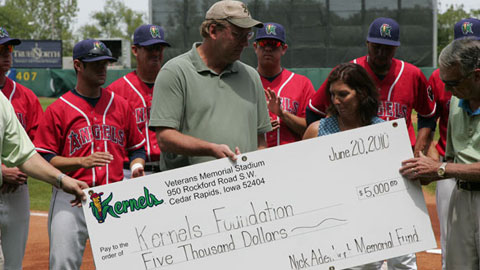 Cedar Rapids, IA – The Cedar Rapids Kernels and Kernels Foundation will present Thomas Eilers as the winner of the 2013 Nick Adenhart Memorial Scholarship before the Kernels game with Peoria on Sunday, June 16th.

Thomas is a 2013 graduate of Cedar Rapids Prairie HS where his school activities, academic accomplishments and baseball accomplishments were quite impressive, making him an excellent choice for the scholarship. Thomas plans on attending the University of Iowa to major in mathematics and education.

Nick Adenhart was a bright young pitcher who played for the Cedar Rapids Kernels in 2006, and was a rising star in the Los Angeles Angels organization. Only hours after Nick’s 2009 season debut on the mound for the Angels, a drunk driver tragically killed him on April 9, 2009 at age 22.

Nick’s family continues to honor him with the awarding of a $1,000 scholarship in his memory. The Kernels Foundation is privileged to administer the scholarship on behalf of Nick’s family.

The Kernels return to Perfect Game Field at Veterans Memorial Stadium on Saturday, May 25th to open a six game home stand with games against Burlington and Clinton.

Fans can enjoy all the action with Morgan Hawk on the radio home of Kernels baseball, 1450 KMRY AM, 93.1 KMRY FM, or listen on-line at www.kmryradio.com, or www.kernels.com.

Tickets may be purchased on-line at www.kernels.com, or by calling the Kernels Ticket Office at 896-7560. Ticket office hours are 10 am to 5 pm, Monday through Friday, and 10 am to 2 pm on Saturday.
This article originally appeared on the official website of the Cedar Rapids Kernels. Click here to view the original story.