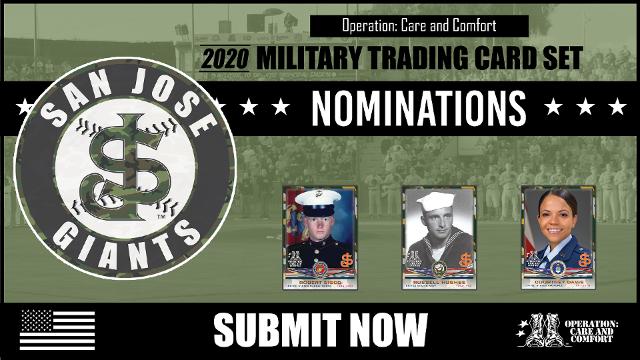 Nominations for Operation: Care and Comfort’s Custom Card Set being taken through March 1

San Jose, CA– Today the San Jose Giants announced and opened nominations for the ninth annual Military Trading Card Set, presented by Operation: Care and Comfort. The trading card set will be comprised of fan nominations of current and former military personnel. Nominations will be accepted through Sunday, March 1. Fans can nominate their hero or heroes on sjgiants.com. A photo of the nominee, in military uniform, must accompany all submissions and be sent to community@sjgiants.com.

Selected recipients will receive their very own trading cards along with the complete trading card sets-all complimentary thanks to Operation: Care and Comfort. The cards will feature the honoree’s name, photo and service seal on the front of the card and a personal bio on the back. Honorees will be recognized during the Ninth Annual Salute to the Military Night presented by Operation: Care and Comfort on Saturday, April 18. The first 1,000 fans in attendance on Salute to the Military Night also receive the commemorative trading card set.

Previous military trading card sets have included honorees from every branch of the military spanning multiple generations. Notable individuals from past sets include former San Francisco Giants Manager, Bruce Bochy’s father Gus Bochy, the “Say Hey Kid” Willie Mays, and the founder of the Lone Survivor Foundation Marcus Luttrell along with many other heroic men and women.

“We can think of no better way to kick off the 2020 season than with the annual Salute to the Military Night alongside our good friends from Operation: Care and Comfort,” said Matt Alongi, San Jose Giants Vice President of Marketing. “The opportunity to honor these heroes and share their respective stories and sacrifices made to preserve our freedom through the Trading Card set is truly a privilege.”