Fundraiser once again held at TGI Friday’s in Brick 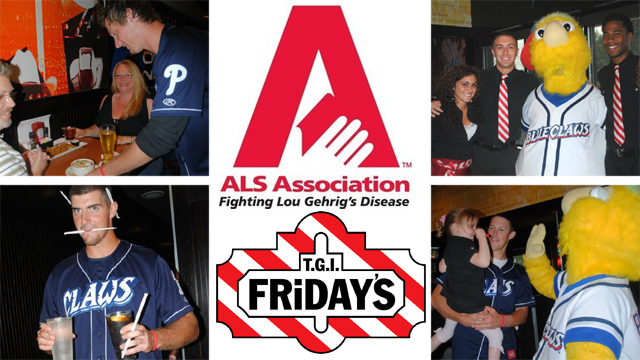 The BlueClaws are proud to hold their 14th annual ALS Celebrity Waiter Event on Wednesday, June 4th at TGI Friday’s on Route 70 in Brick.

The event, which started in 2001, raises money for the ALS Association of Greater Philadelphia, the principal charity of the Philadelphia Phillies.

This marks the third straight year the event will be at TGI Friday’s in Brick. There will be two seatings: one at 5:30 and another at 7:00. As in years past, BlueClaws players will be serving as the waiters, and coaches will serve as bartenders.

20% of every check, plus 100% of all tips, will be donated directly to the ALS Association of Greater Philadelphia.

“This has been a wonderful partnership between the BlueClaws and the ALS Association over the last 13 years and we are looking forward to what is always a great event,” said Jim DeAngelis, BlueClaws Director of Community Relations.

“The Phillies and their family have raised money to fight ALS for 30 years and here at the minor league level, the BlueClaws have been able to do the same since our inception in 2001,” he added.

The ALS Celebrity Waiter event has raised nearly $125,000 in its first 13 years.

There will also be a silent auction, while BlueClaws players will sign autographs and pose for pictures throughout the night.

The BlueClaws are the Jersey Shore’s top stop for affordable, family entertainment. They have led the South Atlantic League in attendance in all 13 years of existence.

Tickets for all remaining BlueClaws games are on sale by calling 732-901-7000 option 2 or online at BlueClaws.com.