Here is a link to the original story on the team’s website. 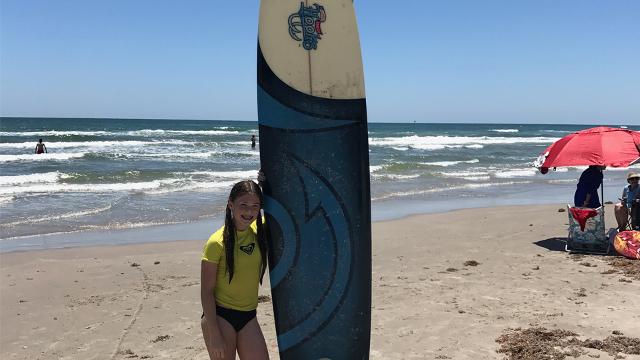 CORPUS CHRISTI – A custom Corpus Christi Hooks/Nolan Ryan surfboard – one of three in existence – will be auctioned off by the Texas Surf Museum during its Third Annual Surftoberfest this weekend.

Gottsch was the first Hooks president from the club’s 2003 inception through the 2008 season.

“Brad Lomax has been a great friend to me personally, the Hooks, and the community at-large for a number of years,” Gottsch said. “When I heard that he had Robert (August) coming to the event this year, and that the funds were going to help hurricane relief efforts, I immediately thought of the board and how it could hopefully help those efforts. It will be a truly unique gift for any Robert August, Nolan Ryan, or Corpus Christi Hooks enthusiast.”

To bid online for the Robert August surfboard, click here from midnight, Thursday, October 5, until 8:30 CDT on Saturday night, October 7.

August will personally autograph the board for the winner.

The board’s design was produced in a special collaboration between August, his son Sam, Reid Ryan, Reese Ryan, and Gottsch. A second Hooks/Ryan WIR “What I Ride” (9.2) surfboard is currently displayed at the museum. Unique features include a classic blue/white design incorporating the Hooks’ primary logo in various elements, plus Nolan Ryan’s iconic “34” logo.

Robert August (born 1945) is an American surfer and surfboard shaper, most famous as one of the subjects of Bruce Brown’s 1966 surf documentary “The Endless Summer” with friend Mike Hynson. The film follows the two pursuing their hobby world-wide during the California off-season, meeting other surfers and discussing surf culture. August picked up surfing in the 1950s, when the sport’s popularity had just begun. His father, Blackie August, was also a noted surfer. Robert’s enthusiasm for and involvement in “The Endless Summer” influenced the sport’s growth for decades to come. His surfboards are sold under the Robert August Surfboards brand. He continues to travel the world promoting surfing, and in 1994 was involved in the shooting of “The Endless Summer II,” in which surfers Pat O’Connell and Robert “Wingnut” Weaver retrace the places visited by August and Hynson 30 years earlier.