Graduating high school seniors from each of the league’s 14 markets competing for over $10,000 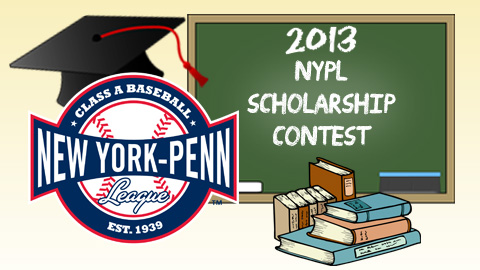 The Class-A Short-Season New York-Penn League and its member clubs are proud to announce that the league’s philanthropic arm, the NYPL Charitable Foundation, will once again award over $10,000 in scholarships this summer to deserving high school graduates from the league’s 14 markets.

Now in its fifth year, the 2013 NYPL Scholarship Contest is open to any graduating senior from a public or private high school within the league’s footprint. Any student who has been accepted at a two or four-year college or university, vocational school, or technical education institution is eligble. Applicants will be judged based on academic performance, volunteer and extracurricular activities, and the impact their local NYPL club and Minor League Baseball have had on their lives.

The scholarship contest will consist of two stages – a local round and a divisional round. In the local stage, students will apply directly to their local NYPL team, with one applicant chosen by each of the 14 teams to advance to the divisional/final round. The 14 finalists will be separated by the division of the team they represent. The winning application from each of the NYPL’s three divisions (McNamara, Pinckney and Stedler) will receive the top prize of a $2,500 scholarship. All other finalists will receive a $250 book award.

“The New York-Penn League Charitable Foundation and our 14 member clubs are committed to giving back to our local communities and our annual scholarship competition has become one of the anchors of our community outreach program over the past five years,” said Ben J. Hayes, President of the New York-Penn League. “In addition to selecting those students who meet and exceed traditional scholarship criteria, we enjoy being able to assist those who have enjoyed many special memories with their hometown team over the years.”

The New York-Penn League Charitable Foundation initiated the scholarship program in 2009 as a way to assist high school seniors from within our league’s footprint who not only meet and exceed traditional scholarship criteria, but have also demonstrated the positive benefits their local NYPL club has had on their life,” said Ben J. Hayes, President of the New York-Penn League. “The Foundation is pleased to have this scholarship program in place and to support our 14 member clubs in their year-round community outreach efforts.”

High school seniors interested in entering the 2013 Scholarship Contest can obtain the official application from their local NYPL club, or by visiting the league’s official website, New York-Penn League.com.

The deadline to submit applications to the nearest NYPL team is June 28, 2013. Each club’s winner, including the three $2,500 scholarship recipients, will be selected in late July and honored at a game in August.

This article originally appeared on the official website of the Batavia Muckdogs. Click here to view the original story.