The Kane County Cougars front office staff has been fortunate to send their staff to do a 2-hour shift at Feed My Starving Children in Aurora, which is about 20 minutes from their ballpark in Geneva. FMSC is a non-profit Christian organization that relies on volunteers to hand-pack meals specifically formulated for malnourished children. Those meals go to nearly 70 countries around the world.

The photo below shows how many meals Cougars staff packed during their shift. FMSC

has several locations. It’s an incredibly fun atmosphere. Everyone has a role in the packing process – some are pouring the ingredients into the bag, others are weighing the items, others are boxing up the meals and placing the boxes in their warehouse. Upbeat music is playing the entire time and it really builds up a sense of camaraderie among our staff who are offering their time. We’d encourage any other minor league team to see if they are close to a FMSC, and have their staff and players volunteer to help.

Oftentimes during the busy portion of the season, it’s tough for our staff to simply be around each other, outside of the ballpark. These monthly initiatives we’ve set up really build team morale among our staff. More importantly, the giving of our time for these causes and seeing the impact we can make in the community (and in the case of FMSC, the world), it’s incredibly rewarding. 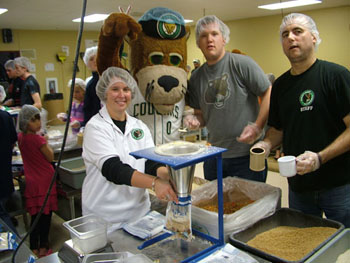 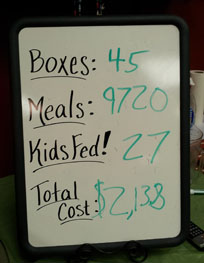