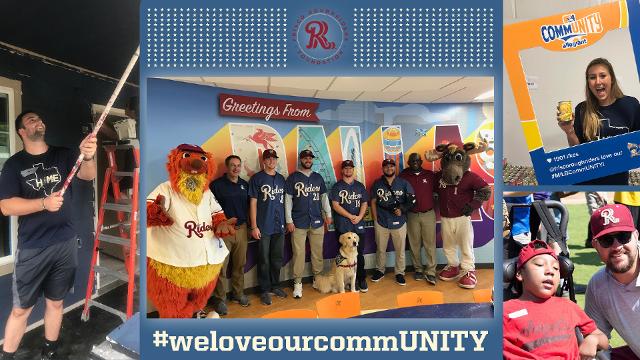 FRISCO, Texas (Sept. 12, 2018) – The RoughRiders Foundation logged more than 200 volunteer hours during the month of August, registering another busy month working with the North Texas community.

“Each month, it seems we take another step forward and that was certainly the case in August,” said Breon Dennis, Executive Director of the RoughRiders Foundation. “It gives me immense pride to see our players and staff contribute to this great community as much as they have been lately.

Here’s a full breakdown of how the Riders got involved in the community throughout August.

* Habit for Humanity (August 8): Staff members painted the exterior of a home and assisted with other construction projects.

* Frisco Fastpacs (August 15): Volunteers sorted and inventoried more than 10,000 goods to be packaged and sent to schools throughout Frisco ISD.

* Dallas-Fort Worth National Cemetery (August 21): Riders representatives helped clean headstones throughout the complex to benefit veterans and their families

For more information on how the RoughRiders Foundation is making a difference in North Texas, click here. If you would like the RoughRiders to volunteer with your organization, please contact Breon Dennis at (972) 334-1978 or breon@ridersbaseball.com.