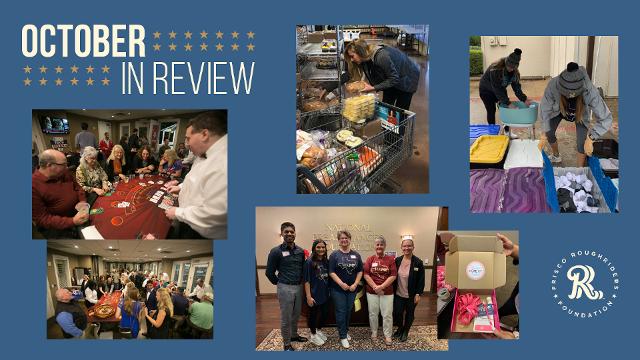 FRISCO, Texas (Nov. 6, 2018) – Though the 2018 baseball season has ended, the RoughRiders Foundation stayed extremely productive during the month of October.

Below is a recap of the Foundation’s activity in October:

* Casino Night (October 13): The Foundation raised more than $6,000 at its annual VIP event thanks to the generous support of the team’s Founder’s members, suiteholders and corporate partners.
* Frisco Family Services (October 16): Riders staff helped sort through donated items and assisted in restocking shelves at the facility.

* RoughRiders Baseball Academy (October 21): During the latest clinic for kids, Halloween candy was collected and donated to Soldier’s Angels Treats for Troops.
* National Breast Cancer Foundation (October 24): Riders employees helped make HOPE kits that will be sent out to patients who are battling breast cancer.

* RoughRiders Fall Festival (October 27): More than 2,000 cans of food were collected and donated to North Texas Food Bank as part of the team’s annual event.

In addition to its involvement in community activities, the RoughRiders also hosted the following events to help support various non-profit organizations:

If you would like the RoughRiders to volunteer with your organization, please email community@ridersbaseball.com. For more information on the RoughRiders Foundation, click here.

The 2019 season begins April 4 at Dr Pepper Ballpark. Ticket memberships and group hospitality packages are now on sale. The promotional calendar will be unveiled in early 2019 with single-game tickets going on sale soon after. For more information, visit RidersBaseball.com or call (972) 731-9200.