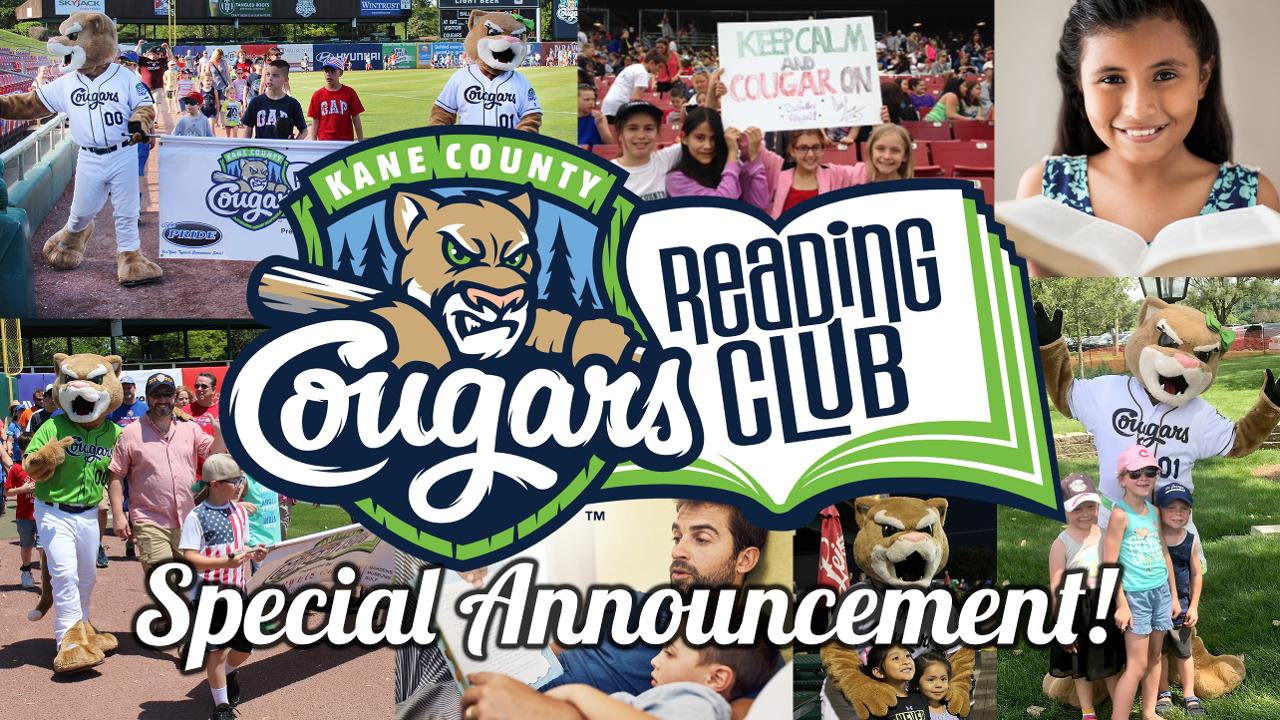 GENEVA, Ill. – The Kane County Cougars have announced multiple improvements to the Cougars Reading Club as well as a new Ozzie and Annie Classroom Appreciation 1K Grant. This is the first announcement of several enhancements the Cougars will be making ahead of their 30th anniversary season. Additional announcements regarding capital improvements, a 30th-anniversary logo reveal and the 30th-anniversary team will be made starting in mid-January.

Prior to the 2020 season, Ozzie and Annie Reading Scholarships were awarded to six local students for the lasting impact their involvement with the Cougars Reading Club has made in their everyday lives. Moving forward, the Cougars will now be awarding 10 total scholarships at $500 each in an effort to expand the appreciation for student involvement and assist with continuing their education.

Each student that participates in the Cougars Reading Club receives multiple rewards including a Golden Ticket. Beginning with the 2020 season, all Reading Club participants who present their Golden Ticket at the box office will be awarded two complimentary tickets for all June-September games, which doubles the ticket reward from previous seasons, ensuring even more family fun throughout the summer.

New for the 2020 season is the Ozzie and Annie Classroom Appreciation 1K Grant. This program will award one teacher’s classroom with a $1,000 grant to show appreciation for their participation in the Cougars Reading Club. Cougars mascots and goodwill ambassadors, Ozzie and Annie T. Cougar, will present the check to the winning teacher and their classroom. Additional details regarding the Classroom Appreciation Grant will be announced soon.

Teachers that are interested in registering their school or classroom in the Cougars Reading Club can visit kccougars.com for more information.

The Cougars Reading Club is an eight-week incentive program that runs between the months of January and March. Students from Pre-K through 8th grade are eligible to participate as long as their school is a member of the Reading Club Program. Students that complete a reading home run are rewarded with a complimentary ticket to an April or May Cougars game, a hot dog and soft drink, official Cougars Reading Club souvenir and bookmark as well as the opportunity to participate in a pre-game on-field parade led by Ozzie and Annie.

Your Cougars 30th anniversary season kicks off on Thursday, April 9 at 6:30 PM against the Cedar Rapids Kernels. For updates on all the festivities, including ticket and promotion specials, follow the Cougars on Facebook, Twitter and Instagram.

The Cougars, Class-A Minor League affiliate of the Arizona Diamondbacks, have been at the forefront of family-friendly entertainment since 1991. In 2015, the franchise became the first Class-A team in Minor League Baseball history to welcome 11 million fans through the gates. A total of 180 former Cougars have reached the Major Leagues including Miguel Cabrera, Nelson Cruz, Josh Beckett, Adrian Gonzalez, Kyle Schwarber and Willson Contreras.