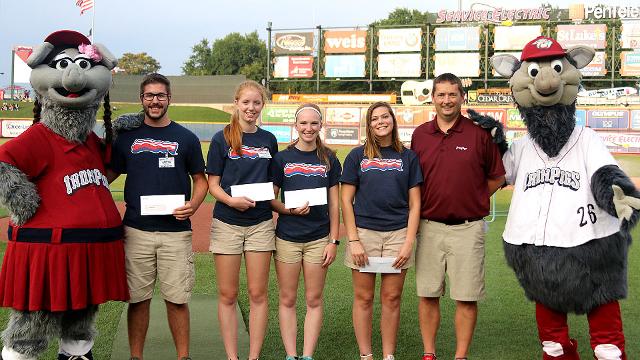 The Lehigh Valley IronPigs announced Tuesday that four gameday employees will each receive $500 towards their college education in the first season of the team’s scholarship program. To be eligible, gameday employees must work at least one full year with the team.

Avita DeMieri has worked with the IronPigs for three years for Food and Beverage at the Yuengling’s Ice Cream stand (TD Bank Plaza). DeMieri will attend the University of Pittsburgh in the fall and major in nursing.

Leah Fastenau has worked with the IronPigs for two years for Food and Beverage at the Jaindl Smoke House (Section 118). Fastenau will attend the University of Minnesota in the fall and major in special education.

Samantha Ganser has worked with the IronPigs for two years for Food and Beverage at the Hot & Fresh Pizza (Section 108). Ganser will be attend Lafayette College and major in Biochemistry.

Andrew Malozzi has worked with the IronPigs for three years for Food and Beverage at Home Plate Ice Cream (Section 113). Malozzi is attending Florida State University and majoring in Actuarial Science and Economics.

For more information regarding the IronPigs Scholarship Program, fans can call the IronPigs at 610-841-PIGS (7447) or can go online to ironpigsbaseball.com/scholarship.

The 2019 IronPigs season is the team’s 12th as the top affiliate for the Philadelphia Phillies and 12th at Coca-Cola Park. Follow the IronPigs on Twitter at @IronPigs and like them on Facebook via Facebook.com/LHVIronPigs.

The 2019 IronPigs season is presented by Capital BlueCross.