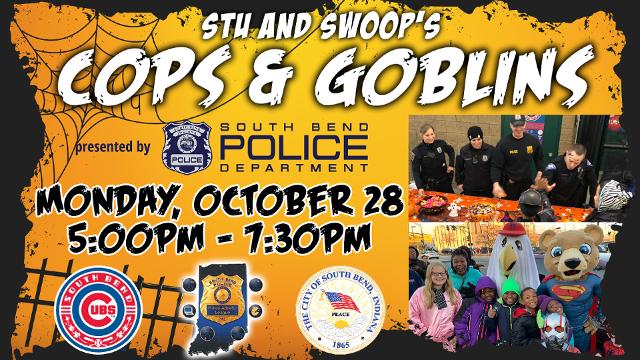 SOUTH BEND, IN – After the success of last year’s event, the South Bend Cubs have once again partnered with the South Bend Police Department to bring back Stu and Swoop’s Cops and Goblins trick or treating event on Monday, October 28 from 5:00 P.M.-7:30 P.M at Four Winds Field.

Over 6,000 kids and parents packed the ballpark last year in a massively successful first go-around of the event. Stu and Swoop’s Cops and Goblins allows local families to come out and enjoy safe trick or treating as the South Bend Police and Fire Department will be joined by other city officials. The groups will hand out candy with other South Bend community sponsors. Along with the groups present, South Bend Cubs mascots Stu and Swoop will be present to meet and take pictures with the kids.

With the completion of The Ivy at Berlin Place Apartments and “Gateway to South Bend” between the two buildings, patrons attending the event can enter and exit through Gate D past center field. The success and attendance of last year’s event has also brought in more vendors for this year’s function. Tables will be set up all throughout the concourse.

The South Bend Fire Department will also bring along their smoke house to the event. The partnership between the Cubs and South Bend Police Department allows the tandem to give back to the entire South Bend community.

“Community policing is a priority for the South Bend Police Department and this annual trick or treat event is the one officers look forward to the most,” South Bend Police Chief Scott Ruszkowski said. “This fun and safe event for families is yet another opportunity for the community and officers to come together and continue to build positive relationships that benefit the city as a whole.”

“We were hoping for a good turn out last year but did not expect our first year hosting this wonderful event to be so successful,” South Bend Cubs Director of Media and Promotions Chris Hagstrom-Jones said. “Given the success of last year, we plan to use more of the ballpark to space out candy tables and try to get more kids through the lines.”

Kids arriving in their Halloween costumes will have the chance to enter a costume contest at the park. Prizes will be awarded to those who are wearing the most fun and creative costumes. Make sure to arrive early, as a crowd exceeding last year’s 6,000 is expected this year.

Any other businesses and organizations who are interested in hosting and sponsoring a table at the event can contact Officer Keenan Lane at 574-235-5941 for more information.

The South Bend Cubs are the Class A minor league affiliate of the 2016 World Series Champion Chicago Cubs. Over the past 31 seasons, the team has won five Midwest League titles, most recently in 2005, and has captured 12 division titles. In 2019, the South Bend Cubs hosted the Midwest League All-Star Game. In June 2017, Four Winds Field, home of the South Bend Cubs, was voted Best Class A ballpark in the country by Ballpark Digest. In 2015 the team was named Ballpark Digest’s Team of the Year and received the John H. Johnson President’s Award, the highest award in minor league baseball. The team is owned and operated by Swing-Batter-Swing, LLC whose principal shareholder is Andrew T. Berlin of Chicago, Ill.