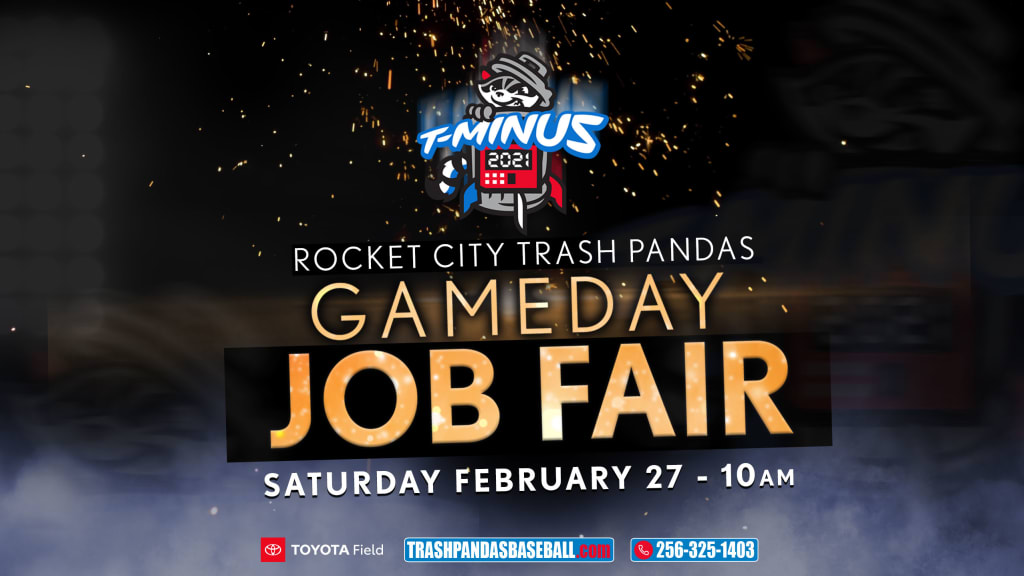 In preparation for the inaugural 2021 baseball season, the Rocket City Trash Pandas will conduct a job fair at Toyota Field on Saturday, February 27th at 10 A.M. Central.

The team is looking for candidates with great energy and enthusiasm to work during Trash Pandas home games, helping to create the best fan experience in baseball. Positions are available across all departments: Food & Beverage, Retail, Ushers, Ticket Takers, Promotions, Production, Parking, Security, and more.

Interested candidates must be at least 16 years of age with legal work status. During the job fair, applicants will be able to interview for a maximum of three (3) positions. However, if you are not hired in one of your top three positions, you may be offered a spot in another department. Each interview will take about five (5) minutes.

Applicants MUST have a completed job application prior to being interviewed. The application can be downloaded and filled out in advance HERE, and there will also be forms available on site. Job preference sheets will also be available for those interviewing for multiple positions.

CDC and Madison County COVID safety mandates will be followed at the job fair, and interviews will be conducted in a socially distant manner. Masks are required. 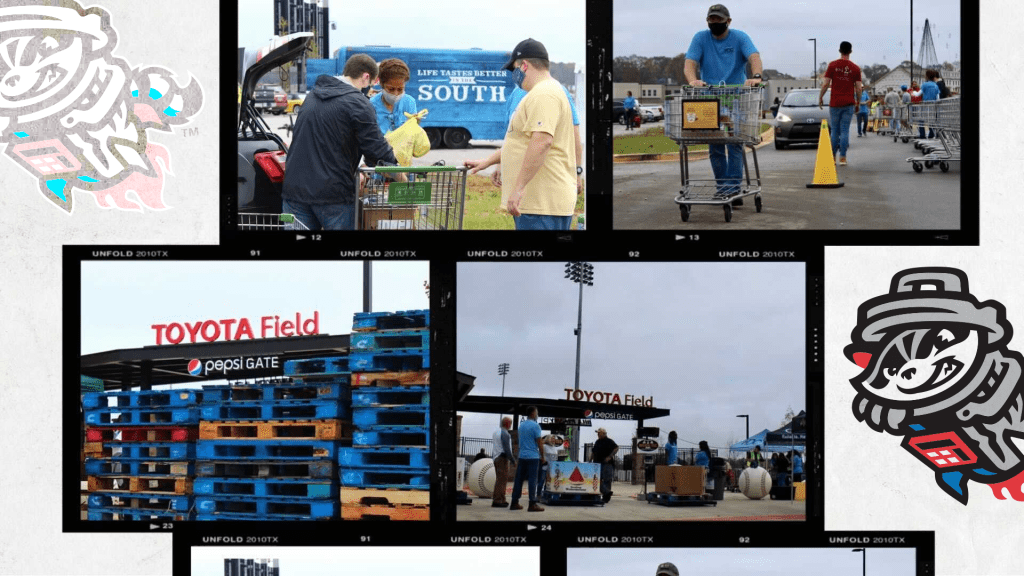 The Rocket City Trash Pandas, located in the greater Huntsville, Alabama area, are currently the Double-A affiliate of the Los Angeles Angels. The team was slated to play their inaugural season at brand-new Toyota Field in 2020 after relocating from Mobile, Alabama (where they were known as the BayBears). Of course, COVID-19 got in the way of those plans. But like Minor League teams across the country, the Trash Pandas have dedicated themselves to staging socially-distanced events that benefit the community while keeping the club in the public eye.

On Wednesday, the Trash Pandas, alongside an army of volunteers from local philanthropic organizations, attempted to enter the Guinness Book of World Records in the category of “World’s Largest Food Drive in a 24-hour period at a single location.” The record they were trying to surpass was 559,885 pounds, achieved by the North Carolina School of Science and Mathematics in Durham, North Carolina. The Trash Pandas, making a difficult task twice as challenging, attempted to break this record in half the amount of time. Wednesday’s food drive was a 12-hour affair, taking place at Toyota Field between 8 a.m. and 8 p.m.

HAPPENING RIGHT NOW: The @trashpandas are trying to break the world record for biggest food drive in 24 hours! They’re already at more than 6,000 pounds and need your help to break the record. Any donation small or large helps, they’re here at Toyota Field till 8 p.m. @waff48 pic.twitter.com/iCCRoRWA0c

Lindsey Knupp, Trash Pandas vice-president of marketing, promotions and entertainment, reported on Thursday morning that the Trash Pandas had failed to enshrine themselves in the Northern Hemisphere’s (and perhaps the world’s) most prestigious record book.

“We didn’t beat the Guinness world record, but we did do very well,” she said. “There were 13 organizations that we were able to give food to. A lot of rescue missions, food banks, churches. All local organizations within 45 minutes of here. They have been running out of food, so we’re thankful we were able to do what we could.”

Minor League teams are known for making world record attempts, many of them on the absurd end of the spectrum. But very few of these attempts, be it for simultaneous bubble-gum blowing or ballpark-wide games of Duck Duck Goose, actually achieve the Guinness world record in question. This is often because Guinness, based in the United Kingdom, is notoriously strict when it comes to documentation. All involved with Wednesday’s food drive worked to ensure that their “World’s Largest Food Drive” attempt would meet Guinness standards. Cameras were set up, scales were certified and signed witness statements were collected.

The total weight of Wednesday’s Toyota Field food haul was well into the six figures. Knupp was unable to say the precise total, however, because late in the day it was determined that the record was out of reach. Weighing efforts were then abandoned, in order to prioritize the more pressing work of sorting and distribution. Throughout the day, a myriad of the Trash Pandas’ corporate partners – including Halsey Foodservice, Pepsi and Publix – provided both logistical support and food donations.

“It was all contactless. People would pop open their trunks and we’d take the food out,” said Knupp. “We had to do quality control, certify that it wasn’t outdated. Then put it on the scales, then load it into trucks and sent them off to different organizations once they were filled.”

While the Trash Pandas’ food drive was clearly a team effort, Knupp singled out local volunteer Nicole Wilson as the individual most responsible for making the event a reality. Wilson, working with Manna House, a Huntsville-based non-profit food assistance organization, approached the team with the idea and also oversaw the Guinness Book of World Records application process. Organizations like Manna House are always in need of food donations from the community, but the ongoing pandemic has made this work all the more important.

In promoting the World Record Food Drive, the Trash Pandas implored their fans to “Be a Souper Hero.”

“A lot of people did bring soup, a good heavy-type donation,” said Knupp. “We had crackers, pasta, rice and a lot of canned goods, for sure. Some people didn’t think about weight. We had some ramen noodle donations.”

Whether it was 10 pounds or 10 ounces, the Trash Pandas collected as much as they could to help as many as they could. The team came up light on achieving Guinness world record immortality, but Wednesday’s Toyota Field effort set a template for possibly heavier endeavors in the future.

“We’re trying to make sure our community knows we’re here for them,” said Knupp. “We’re not just here for season ticket holders, mini-plan holders, sponsors. We’re here for the entire community and we’re not going anywhere. We want to help, give back, and do good.” 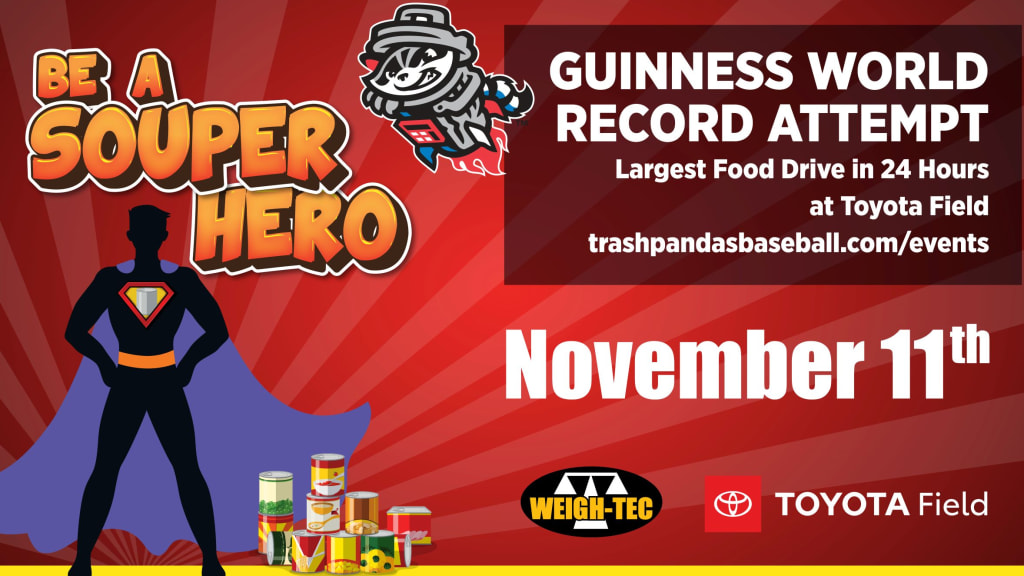 The Rocket City Trash Pandas have partnered with multiple local organizations to help feed families across North Alabama in a big way as the holiday season approaches.

On Wednesday, November 11, a Guinness World Record attempt for “Largest Food Drive in 24 Hours at a Single Location” will take place at Toyota Field. The goal of 600,000 pounds of food would eclipse the current record of 559,885 pounds, set back in 2011 in North Carolina.

The drive will run from 8 AM to 8 PM. For safety purposes, there will be a designated drive-through route to drop off non-perishable food items. Drop-offs will be contactless – food can be placed in the back seat or trunk, and volunteers will simply remove the items from the vehicle. Any size donation is encouraged and appreciated.

Cameras will be set up on site to document the donations, weigh stations, and packing of the trucks for the world record attempt. Independent witnesses will also be on hand to confirm a breaking of the record. Giveaways will take place throughout the day for those who contribute food items.

For ease of traffic flow, visitors with donations should enter Toyota Field from the west via Intergraph Road, taking a left on Lime Quarry Road and then another left onto Town Madison Blvd to arrive at the stadium.