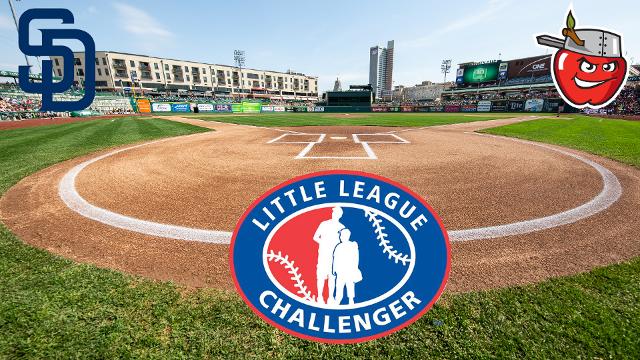 FORT WAYNE, Ind. – The Fort Wayne TinCaps and the San Diego Padres are donating $1,000 to provide bats and helmets to the local Challenger Baseball League at Northcrest Little League.

“When we heard about the opportunity to support such a tremendous organization in our community, we were excited to help in any way possible,” said TinCaps President Mike Nutter. “The Challenger Baseball League has an amazing mission, and we’re grateful to have a Major League affiliate like the Padres who are committed to helping us make a positive impact in our community.”

The Fort Wayne and San Diego organizations are in their 20th season of affiliation together, going back to 1999. Annually, the Padres sponsor more than 1,500 tickets that are donated to non-profit organizations in the Fort Wayne area that allow less fortunate fans to attend games at Parkview Field. In addition, the Padres underwrite the costs for 1,000 tickets for military families on Military Appreciation Day at Parkview Field (which this year is set for Sunday, June 10). Not to mention, Padres prospects with the TinCaps volunteer to make appearances in the community throughout the season.

“The Padres are always committed to helping the TinCaps make a difference in the community in Fort Wayne as we do in San Diego,” said Todd Stephenson, Padres Manager for Minor League Administration. “Like the TinCaps, as an organization, the Padres are committed to making the game of baseball inclusive for all. The Challenger Baseball League does an incredible job and hopefully our donations help these kids and young adults create special baseball memories that will last a lifetime.”

Representatives from the TinCaps, including team mascot Johnny TinCap, will deliver the equipment on Sunday, June 3.

The Challenger Baseball program was initiated by Little League Baseball in 1989 to meet the needs of physically and mentally challenged brothers and sisters of Little League players. The Fort Wayne Challenger program began in 1991 with two teams totaling 17 players, playing games alternately between the Northcrest and Forster Park Little League complexes, to be accessible for wheelchairs.

In 1999, two additional teams were added with 46 players ages eight through age eighteen or High School graduation. In 2008, Fort Wayne was chartered with the first experimental Senior Challenger program for players ages 14 to unlimited age, which now serves an additional twenty-two players.