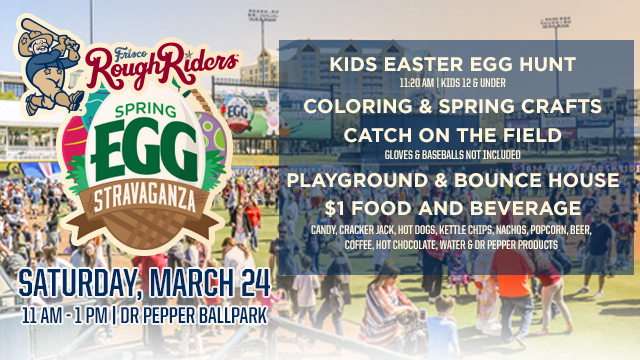 The Frisco RoughRiders, the Double-A affiliate of the Texas Rangers, are hosting the third annual Spring EGGstravaganza at Dr Pepper Ballpark on Saturday, March 24 from 11 a.m. to 1 p.m. This special free event is open to the public and highlighted by an Easter egg hunt in the outfield starting at 11:20 a.m. for all kids 12-and-under.

FRISCO, Texas (March 9, 2018) – The Frisco RoughRiders, the Double-A affiliate of the Texas Rangers, are hosting the second annual Spring EGGstravaganza at Dr Pepper Ballpark on Saturday, March 24 from 11 a.m. to 1 p.m. This special free event is open to the public and highlighted by an Easter egg hunt in the outfield starting at 11:20 a.m. for all kids 12-and-under.

In addition to the Easter egg hunt, there will be coloring and spring crafts, airbrush artists and a bounce house. Both the Primrose Schools and Riders Playgrounds will be open during the event. There will also be appearances from RoughRiders mascots Deuce, Daisy, Ted E Bear, Bull Moose and Brooks.

The club encourages fans to bring gloves and baseballs to the park to play catch on the field after the Easter egg hunt. Kids also have an opportunity to run around the bases, just like their favorite RoughRiders players!

Fans interested in purchasing single-game tickets to Opening Day on April 5, any of the Deep Ellum Party @ The Yard dates, or any of the 70 games during the regular season are encouraged to speak with a sales representative at Guest Services or visit the Box Office during the event. Tickets are also available at RidersBaseball.com and (972) 731-9200.

The Frisco RoughRiders are the Double-A affiliate of the Texas Rangers and play their games at beautiful Dr Pepper Ballpark in Frisco, Texas. The team was founded in 2003 and has finished first among all Double-A franchises in attendance in each of the last 13 seasons (2005-2017). In August 2014, the RoughRiders were purchased by an ownership group led by Chuck Greenberg. Since then, the new ownership group, together with the City of Frisco, has spearheaded numerous major franchise enhancements, investing over $8 million in a wide array of facility upgrades and improvements, including a state-of-the-art HD video board, sound system, Bull Moose Saloon, InTouch Grille, Riders Outpost Team Store and the world’s largest water feature in a sports facility, the massive Choctaw Lazy River. These enhancements earned the Riders and the City of Frisco Ballpark Digest’s prestigious “Best Ballpark Renovation” award for two consecutive years (2015 and 2016). More than 140 former RoughRiders players have gone on to play Major League Baseball, including All-Stars Chris Davis, Adrian Gonzalez, Ian Kinsler and Nelson Cruz , as well as current Rangers stars Elvis Andrus, Rougned Odor  and Nomar Mazara . For more information on the Frisco RoughRiders and Dr Pepper Ballpark, please visit RidersBaseball.com or contact Art Garcia at AGarcia@RidersBaseball.com or Ryan Rouillard at RRouillard@RidersBaseball.com.