You can still participate if you won’t be in town 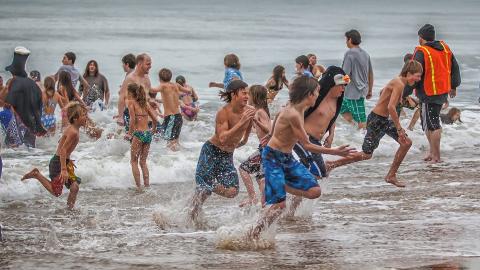 Berlin, Md. – Planners of the 20th Annual Atlantic General Hospital Penguin Swim just announced a new feature of the event, the Virtual Swim. Now, Shore residents can still participate in the popular fundraising event for the acute care community hospital, even if they plan to be out of town on New Year’s Day.

“We wanted to do something different for this year’s event, since it’s our 20th Anniversary,” said Sal Fasano, Penguin Swim co-chair. “And, we thought this would also be a way to include those who can’t attend because the event falls mid-week.”

The Virtual Swim works similarly to the actual plunge. Participants will still register and fundraise, either as individual penguins or as part of a team. And, they will still jump into the water – just not into the Atlantic Ocean at 91st Street in Ocean City. To commemorate their jump, virtual penguins can snap a photo and share it with the Penguin Swim’s online community on Facebook and Twitter using #OCPenguinSwim.

More information and instructions for participation can be found on the official Penguin Swim website at www.Penguinswim.atlanticgeneral.org.

91st Street and the Ocean

Atlantic General Hospital has been providing quality health care to the residents of Worcester, Wicomico, Somerset (Md.) and Sussex (Del.) Counties since May 1993. Built by the commitment and generosity of a dedicated community, the hospital’s state-of-the-art facility in Berlin, Md. combines old-fashioned personal attention with the latest in technology and services. Atlantic General Health System, its network of more than 25 primary care provider and specialist offices, care for residents and visitors throughout the region. For more information about Atlantic General Hospital, visit www.atlanticgeneral.org.

This article originally appeared on the official website of the Delmarva Shorebirds. Click here to view the original story.