Presentation made before BlueClaws game on July 12th 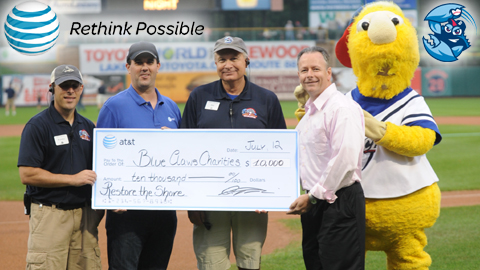 LAKEWOOD, NJ – AT&T presented BlueClaws Charities with a check for $10,000 before their game on Friday, July 12th for their Restore The Shore relief efforts.

The BlueClaws and AT&T partnered this year on a Score for the Shore program through which AT&T made a $30 donation to BlueClaws Charities Sandy relief efforts every time the BlueClaws scored a run in the first half of the season.

While the BlueClaws scored 267 runs in the first half for a total of $8,010, AT&T Sales Director Bob Woodier presented BlueClaws General Manager Brandon Marano and Community Relations Director Jim DeAngelis with a check for $10,000.

“AT&T is proud to support BlueClaws Charities relief for victims of Sandy in New Jersey,” said Tom DeVito, Vice President and General Manager, AT&T New Jersey/New York. “So many of our employees, family, and friends are still struggling from the after-effects of the super storm and we urge the public to pitch in and do what they can as those communities re-build their homes and businesses.”

The BlueClaws thank AT&T for their support of BlueClaws Charities Restore The Shore relief efforts.

This ceremony was originally scheduled for the South Atlantic League All-Star Game but was re-scheduled after a 2 hour and 46 minute rain delay.