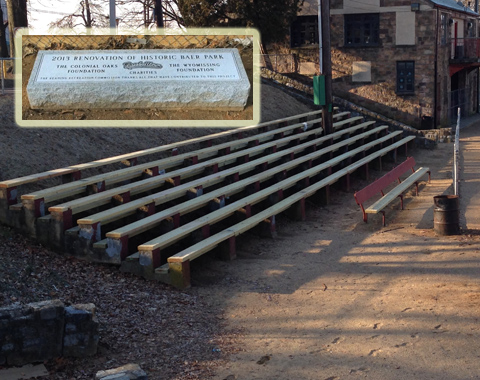 After close to eight months of fundraising and construction, Baseballtown Charities, in conjunction with the Reading Fightin Phils, has completed the Baer Park Renovation Project in the northwest section of the City of Reading. The project, first announced in May, was made possible through nearly $90,000 in donations from Colonial Oaks Foundation and the Wyomissing Foundation and private donors through Baseballtown Charities.

“Baseballtown Charities is very pleased with the completion of the renovations at historic Baer Park,” said President of Baseballtown Charities Chuck Domino. “We are anxious to see the kids and parents enjoy the improvements starting this spring. A special thanks to the Colonial Oaks Foundation and the Wyomissing Foundation as well as many other community minded donors who stepped up to the plate to allow Baseballtown Charities to continue our mission of improving the lives of our inner city youth through the sport of baseball.”

Construction on the field began in late summer after a joint cleanup effort from members of the Reading Fightin Phils and students at Alvernia University. The project included a total replacement of the bleachers, major field renovations, and the installation of a chain-linked fence that encompasses the entire facility.

The large scale renovations to Baer Park have earned the praise of city officials, including Mayor Vaughn Spencer.

“On behalf of the City of Reading, I would like to thank Baseballtown Charities, the Colonial Oaks Foundation, and the Wyomissing Foundation, as well as, the other donors,” said Mayor of Reading Vaughn Spencer. “The renovations at Baer Park will improve the lives of our city youth by providing them with a much improved facility.

The project was the first among several fields identified by Baseballtown Charities and the City of Reading Parks and Recreation Commission as area in dire need. Like Baer Park, most of the targets have fallen in repair since their heyday and will hopefully see a revival thanks to the non-profit organization.

“The Reading Recreation Commission is excited for the youth of Reading and the community to begin to enjoy the newly renovated Baer Park this spring,” said Reading Recreation Commission Executive Director Daphne Klahr. “The new turf, fencing, bleachers, and field improvements will be the catalyst for future baseball programming at the park and hopefully marks the beginning of the revitalization of the Northwest Reading community. A big thank you to Chuck Domino and Baseballtown Charities for seeing this project through to completion as well as [to] the Wyomissing Foundation, the Colonial Oaks Foundation and all of the individuals and businesses whose financial support made the project possible. The Reading Recreation Commission looks forward to continuing their partnership with Baseballtown Charities to help improve inner-city parks and ball fields for Reading youth.”

Baer Park was named after the 19th Century Reading Railroad magnate George Baer. Located in the 15th Ward of the City of Reading, the park features a lighted baseball field, tennis courts, basketball courts, a playground, a concession stand and a stone field house on its nine acres of land.

Today, Baer Park is a nerve center of activity in the 15th Ward. On any given day, hundreds of youth can be found using the various attractions or having fun by spending time with friends. Throughout the spring and summer, the park’s baseball field is home to numerous city baseball and softball organizations. It is also the home field for junior high teams from the Reading School District.

On top of donations from the Colonial Oaks Foundation and Wyomissing Foundation, funds were raised at Reading Fightin Phils home games in the summer of 2013. The centerpiece of the team’s fundraising efforts came late in the season when first baseman Jim Murphy donated his prized 1991 Jaguar XJ6 Sovereign for a raffle. Fans came out in droves to support the cause thanks to Murphy’s Jaguar and raised over $5,000 for Baseballtown Charities.

As an unconventional means of raising awareness and funds for a non-profit, the raffle helped cement Reading as the Eastern League’s nominee for the inaugural John Henry Moss Community Service Award presented by Minor League Baseball.

Baseballtown Charities, a non-profit 501(c)(3) entity, was founded in 2002 in association with the Reading Phillies in order to keep baseball alive in Reading through charitable donations to underprivileged youth who otherwise wouldn’t have the opportunity to play baseball. The organization also pays tribute to Reading’s rich baseball history.

Since its inception in 2002, the Baseballtown trademark has played a necessary part in the baseball community of Berks County. Under the Baseballtown namesake, FirstEnergy Stadium has played host to the High School All-Star Game and the Olivet’s Boy’s and Girl’s Club Championship. Each year, the organization crowns the King or Queen of Baseballtown to honor the past by recognizing that individual’s accomplishments and contributions to baseball/softball.

Perhaps the biggest accomplishment the organization has overtaken was the construction of Gordon Hoodak Stadium at Lauer’s Park in 2006. Through contributions exceeding $900,000, the youth ballpark was built in a neighborhood that is quickly returning to its glory days. It sits on the grounds of Lauer’s Park Elementary School, named for the former stadium where Babe Ruth and Shoeless Joe Jackson both played. The original housed several professional teams and hosted barnstorming tours from 1907-1941. Reading’s own baseball legend, the late “Broadway” Charlie Wagner, former Red Sox pitcher and roommate of Ted Williams, began his career there.
This article originally appeared on the official website of the Reading Fightin Phils. Click here to view the original story.