5th Grader from Assumption B.V.M. School in West Grove, PA chosen out of thousands of entries. 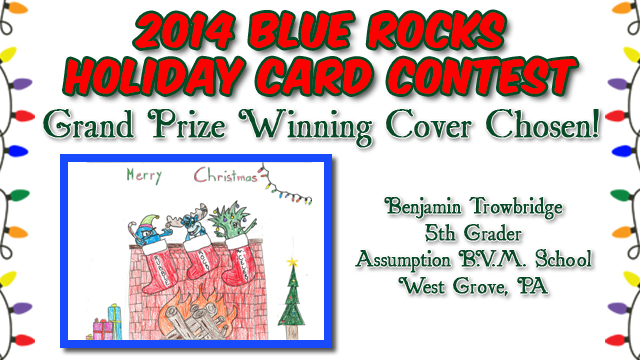 The Wilmington Blue Rocks are excited to announce the winner of the 13th Annual Holiday Card Contest. Thousands of entries were received, but unfortunately, there could be only one winner. After a tough decision process, Rocky Bluewinkle, Mr. Celery and the rest of the Holiday Card Contest Committee decided that the overall winner was Benjamin Trowbridge, a 5th Grader from Assumption B.V.M. School in West Grove, PA. His artwork will be featured on the cover of the Wilmington Blue Rocks Holiday Card. Benjamin will be rewarded with a team-autographed baseball, a ceremonial first pitch and 10 tickets to a 2015 Blue Rocks game.

The Wilmington Blue Rocks would like to thank all those who entered. Entries were received from students in Kindergarten thru 5th grade from Delaware, Pennsylvania, Maryland and New Jersey.

Each entrant will be rewarded with 2 tickets to a Blue Rocks game in 2015 as a thank you for participating. The tickets will be mailed to the participating teachers by February.

The Blue Rocks, who drew 284,701 fans to Frawley Stadium in 2014 and averaged more than 4,400 patrons per game, have season seats and group packages for the 2015 season on sale now. Fans should call 302-888-BLUE or visit BlueRocks.com for more information.