Money Will Help Support The More Than 25,000 Delaware Children Who Benefit From Boys & Girls Club 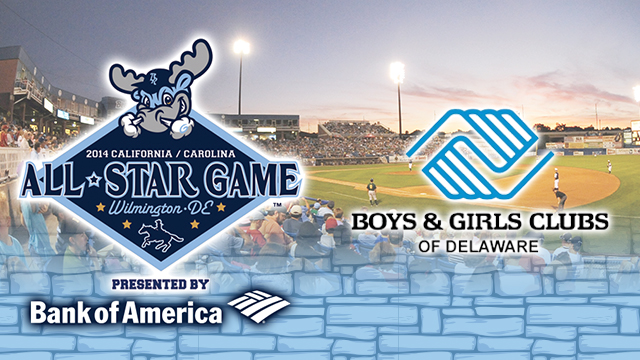 Wilmington, DE – The Wilmington Blue Rocks and Bank of America are proud to announce that the organizations will be donating $4 to the Boys & Girls Club of Delaware for every ticket sold to the 2014 California League/Carolina League Hitting Challenge at Frawley Stadium. Tickets for the Hitting Challenge, which is slated for 6:30 p.m. on June 16 and kicks off two days of All Star Festivities in the First State, go on sale Saturday, March 1 at the Blue Rocks Ticket Office.

“We have received a great deal of positive publicity regarding the special nature of this Hitting Challenge and Home Run Derby so we are expecting that buzz to lead to a huge crowd,” said Blue Rocks general manager Chris Kemple. “Thanks to our partnership with Bank of America we can make this event about more than just providing Delaware sports fans with a night to remember, but about raising money for an outstanding cause.”

The Blue Rocks are already set to become the first Minor League baseball club to host a Home Run Derby where players bat from the outfield and try to hit the ball into the stands behind where home plate normally resides. The hitting challenge will feature some of the best young prospects in baseball from both the Carolina League and California League competing in two events. First there will be a Hitting Contest featuring targets that players will have to hit in order to earn points. Then there will be a Home Run Derby. Fans will have the opportunity to catch any dingers off of these sluggers’ bats as the Blue Rocks will flip the field at Frawley Stadium. A new batting cage will be installed in center field and derby contestants will be awarded homeruns by hitting balls into the seating area.

Now a potential souvenir is not the only thing fans will be able to take home from the ballpark that night, they will also have the knowledge that half of their price of admission went directly toward the more than 25,000 children in all areas of the state who benefit from the work done by the Boys & Girls Club.

Boys & Girls Clubs are much more than just gyms. Each of the 18 Delaware sites offer a unique mix of quality programming focusing on educational enhancement, character and citizenship, physical education, health, and arts, for as little as $15 per child per year. Moreover, all Boys & Girls Club sites are certified as child care centers and licensed by the State of Delaware. In fact, more Delaware families trust their children to the care of the Boys & Girls Club than any other licensed provider in the state.

Kemple said that up to $28,000 can be raised and that none of it would be possible without the support of Bank of America.

“We’re excited to be working with the Blue Rocks on an event that will ultimately help support an organization that connects our youth to opportunities they may not otherwise have,” said Chip Rossi, Delaware president, Bank of America. “The bank has been a long-time supporter of the Boys & Girls Club. By combining the excitement of the hitting challenge with the ability to support families in Delaware – it will be opportunity for everyone to enjoy.”

Tickets for the 2014 Hitting Challenge are just $8 while All-Star Game tickets (June 17) are only $15. Individual tickets for both events go on sale March 1. For more information call 302-888-BLUE or visit bluerocks.com.