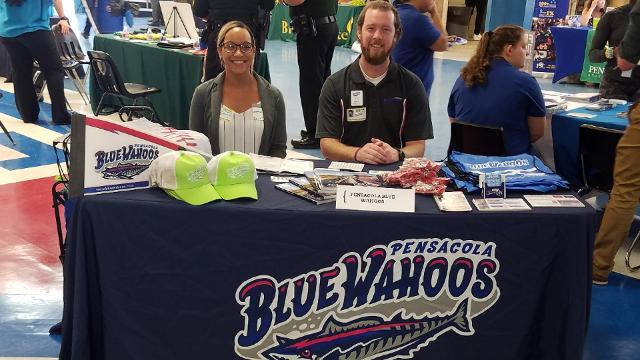 They were part of a variety of career representatives, including Navy Federal, WEAR-3 TV, and all branches of the armed services, with displays inside the school’s gymnasium. The career day also included the University of West Florida, Pensacola State College, University of South Alabama and other area and region universities.

“They were pushing it to juniors and seniors, but all students were allowed to participate,” said Djuric, herself a Pine Forest and UWF graduate.

“It was done over two 30 minute lunches,” Sides said. “It was a good variety of kids.”

Each student was required to ask a question at each company display in exchange for a sticker to fill a card for potential prizes in a drawing as the event concluded. The requirement pushed students to engage with each of the participating companies and gain understanding about job positions.

“For me, since this was my first one (job fair), it was inspiring to shed light on (team),” Sides said. “Some of them were not sure obviously where they wanted to go, or if they were looking at a bunch of schools and we able to position it to say, ‘Find one of these schools and we would love to work with you after,’ so it was good.”

The students were also informed about the summer positions with the team during the baseball season. The Blue Wahoos seek new people and welcome younger people each year to work the 70 home games in a variety of jobs.

The students inquiries ranged from ones whose parents were season ticket holders and had been to games, along with students who did not know about the Blue Wahoos.

“Probably at least 20-percent had never heard of the Blue Wahoos,” Drujic said.

“Most of them see the team, but don’t realize the concessions, the stadium operations, everything that goes behind it,” Sides said. “So maybe that can trigger them to think about sports management (in college) or other positions.”

The minimum age requirement is 16 to work part-time with the Blue Wahoos. The team holds job fairs in January where interviews are conducted after applicants fill out forms.

Djuric said the Blue Wahoos welcome any opportunity to display at job fairs and educate people on the variety of opportunities in professional baseball.

“I really commend the school for getting students thinking about this so early on,” she said. “I know for me, it really wasn’t until my senior year for something like this.”

Probably at least 20 percent had not heard of the Blue Wahoos .” Danielle said.

“Most of them don’t see what putting a game on entails, the concessions, the stadium operations the everything that goes behind it,” Sides said.