Event aims to raise awareness and funds for the fight against this disease, while paying tribute to those fighting for our county 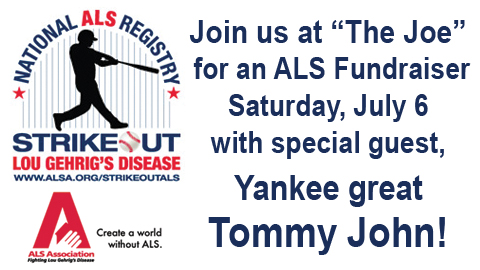 TROY, NY – The Tri-City ValleyCats have partnered with Strike Out Lou Gehrig’s Disease, the National ALS Registry and the ALS Association to hold a fundraiser at “The Joe” on Saturday, July 6. Former Yankee great, Tommy John will be in attendance as part of a meet & greet opportunity and ALS Fundraiser Dinner in the ValleyCats Picnic Pavilion. Proceeds from this dinner will be donated to the ALS Association.

This event is part of a season-long partnership between Minor League Baseball and the ALS Association to strikeout Lou Gehrig’s Disease. Part of this initiative is to support the men and women serving in our armed forces, as those in the military are twice as likely to develop Lou Gehrig’s Disease.

The ValleyCats will pay tribute to our military heroes throughout the July 4th homestand and help raise awareness of Lou Gehrig’s Disease as the National ALS Registry will be on hand with a table for each of these games, including Veterans Night on July 5th. The National ALS Registry is a research project that may help scientists find the cause, treatment and cure for the disease, which is fatal in an average of just two to five years.

Brown’s Brewing Company will also be joining the ValleyCats to support this cause as a proud participant in Ales for ALS, a national fundraising project to help discover a treatment for ALS. Brown’s has brewed a special, limited edition batch of Iron Horse Ale in honor of legendary Yankee great, Lou Gehrig. In the spirit of the its baseball namesake and in conjunction with the Strike Out ALS event on July 6th, Iron Horse Ale will be exclusively available at Joseph L. Bruno Stadium during ValleyCats games while supply lasts. Brown’s Brewing Company and the Tri-City ValleyCats are donating a portion of the proceeds of Iron Horse Ale to the 501c3 nonprofit  ALS Therapy Development Institute (ALS TDI), the world’s leading ALS research organization. For more information, go to www.als.net.