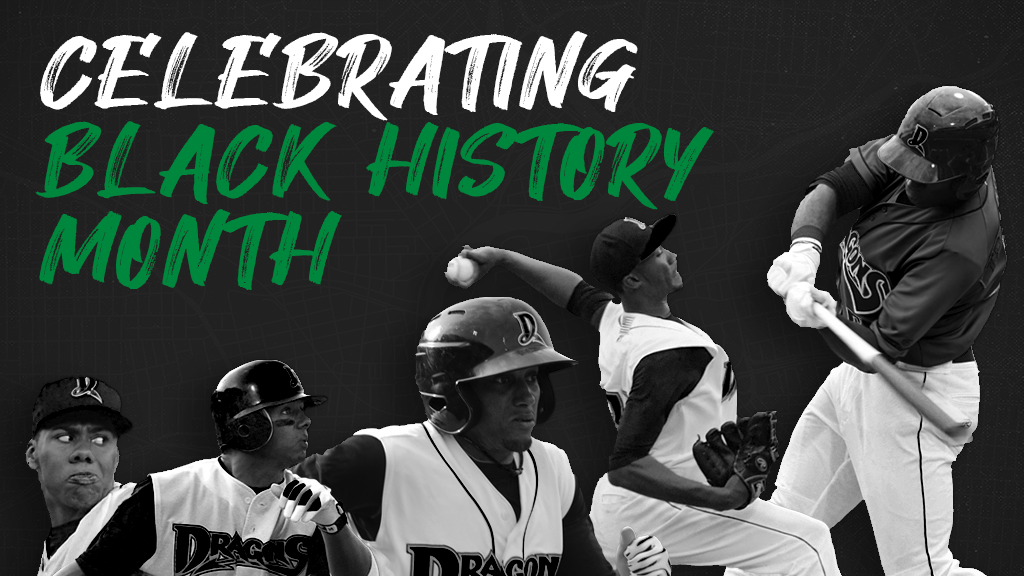 In celebration of Black History Month, throughout February, teams across Minor League Baseball are taking a look back at five of the best Black players to suit up for their club.

While some of these standout performers went on to long and illustrious Major League careers, others simply had great Minor League careers or, in some cases, just one incredible season that went down as “a year for the ages.” _

Here is a look at five of the best Black baseball players ever to suit up for the Dayton Dragons.

Billy Hamilton produced one of the greatest base stealing seasons in baseball history with the Dayton Dragons in 2011 as he gained national recognition for his speed on the diamond, a quality that would continue to gain attention throughout his career.

Hamilton, a second round draft pick by the Reds in 2009 after a record-setting three-sport high school career (baseball, basketball, and football) in Taylorsville, Mississippi, began his season in Dayton by stealing second base in the first inning of his first game with the Dragons. Before the end of May of that season, Hamilton had already broken the club record for stolen bases in a season, and on September 3, he became the first player in the history of the Reds organization to reach the 100 steal mark. He finished the year with 103 stolen bases. Hamilton became so popular with fans at Day Air Ballpark that every time he reached safely, a growing murmur of excitement would fill the stadium as spectators waited to see when he would try to steal his next base.

In 2012, Hamilton moved up in the Reds system and surpassed his stolen base total from the previous year, swiping 155 bases over the course of a season split between High-A Bakersfield and Double-A Carolina. That total broke the all-time record for all of Minor League Baseball and was 25 more than Rickey Henderson’s Major League record. Hamilton made his Major League debut with the Reds late in the 2013 season and in 2014, still holding rookie status, stole 56 bases for the Reds to break their all-time rookie record.

Hamilton has more than 300 career stolen bases in the Major Leagues and finished second in the National League for five straight seasons from 2014-18. He emerged as one of the greatest defensive center fielders in baseball and was part of the Chicago White Sox division championship team in 2021.

Hunter Greene was only 18 years old when he opened the 2018 season with the Dragons, firing a 100 mph fastball with his very first pitch of the year at Day Air Ballpark in Dayton. By the time Greene was drafted by the Reds with the second overall selection of the 2017 draft out of Notre Dame High School in suburban Los Angeles, he had already appeared on the cover of Sports Illustrated.

Greene was undoubtably the most famous Minor League player in the nation in 2018 with the Dragons, thrilling fans with the tremendous velocity on his pitches and attracting sports media outlets from across the country. In July of that season, he broke the stadium record when his fastball reached 102 mph, topping the mark of MLB all-star Aroldis Chapman four years earlier when he appeared in Dayton on a Major League injury rehab assignment.

Greene, still only 22 years old, reached the Triple-A level in 2021 with Louisville in the Reds organization and is counted upon as future standout on the pitching staff in Cincinnati.

Amir Garrett spent two seasons with the Dragons in 2013-14 as he made the transition from college basketball star to professional baseball pitcher. Garrett had been drafted by the Reds as a developmental prospect in the 22nd round in 2011 out of Findlay College Prep School in Henderson, Nevada, a school that did not have a baseball program. Garrett was a 6’5” basketball player at St. John’s University in the Big East Conference who was able to spend part of 2013 with the Dragons before returning to college before the end of the baseball season to retain his eligibility on the hardwood.

In 2014, Garrett returned to the Dragons and made tremendous progress as a pitcher, dominating at times, which convinced him to give up his future basketball career to focus on baseball full-time.

Garrett continued to climb through the Reds farm system before earning a spot on the Reds Opening Day roster in 2017. He became a regular contributor out of the Reds bullpen, pitching in at least 60 games in 2018, ’19, and ’21, and in the abbreviated season of 2020, he posted an ERA of 2.45 while striking out 26 batters in 18 innings and allowing just 10 hits.

Chris Dickerson enjoyed an outstanding 2004 season with the Dragons on the way to a successful seven-year Major League career with the Reds, Brewers, Yankees, Orioles, and Indians from 2008-14.

Dickerson reached the big leagues with the Reds in 2008, batting .304 in 31 games, and hitting .275 in 97 games the following year. Before his retirement, Dickerson played in 355 MLB games and was on the Yankees playoff roster in 2011.

Taylor Trammell was a key member of the Dragons playoff team in 2017 as a combination of power, speed, and toughness on the field. Trammell had been a high school football legend at Mount Paran Christian School in Kennesaw, Georgia, where he scored 39 touchdowns in one season as a senior. The Reds drafted Trammell in the supplemental first round in 2016 and he immediately became one of the top prospects in the organization.

Trammell was only 19 years old when he opened the 2017 season with the Dragons, but he emerged as one of the league’s best players and helped carry the Dayton club to the semi-final round of the post-season playoffs. Trammell was selected as a Baseball America Class-A All-Star and finished second in the league in runs batted in, stolen bases, and walks while ranking third in hits and triples.

In 2018, Trammell moved up in the Reds organization and was selected as the Most Valuable Player of the Sirius XM All-Star Futures Game. In 2021, he made his big league debut with the Seattle Mariners at the age of 23, appearing in 51 games with Seattle and blasting eight home runs.