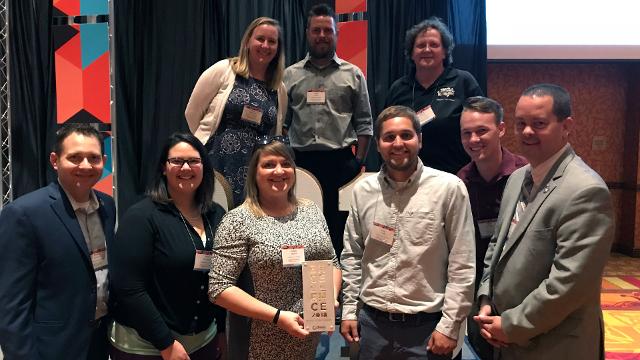 The Omaha Storm Chasers are the recipient of a Greater Omaha Chamber’s Business Excellence Award for leadership. The organization was also honored for their 50 years in business at the chamber’s award ceremony on Thursday evening at the Embassy Suites La Vista.

“To receive this Business Excellence Award and to be recognized for 50 years in the Omaha community is special, and behalf of our entire front office I would like to thank the Greater Omaha Chamber,” said Storm Chasers President and General Manager Martie Cordaro. “I’m very proud of our ownership and leadership group for providing an environment for our employees’ professional growth in their current and future endeavors.”

The Omaha franchise is currently in its 50th season playing in the Omaha Metro dating back to 1969. The team has been affiliated with the Kansas City Royals for all 50 seasons, marking the longest current running Triple-A affiliation in Minor League Baseball. The organization has welcomed over 14 million fans through the gates of Rosenblatt Stadium and Werner Park for games and special events. The franchise has also had an economic impact of more than $17 million annually.

Off the field the Storm Chasers has garnered numerous industry honors, including two nominations for Minor League Baseball’s John H. Henry Moss Community Service Award, in addition to earning Ballpark Digest’s 2016 Charity Award. Over the past seven years alone, the front office has combined to donate more than $4 million in cash, goods, services and in-kind donations to more than 600 community organizations.

The organization was one of 21 Business Excellence Award recipients. Other winners included First National Bank and Open Door Mission, who both partner with the Storm Chasers organization as well.