All proceeds from Storm Chasers/MLB merchandise will go to help devastated area of Moore, Oklahoma 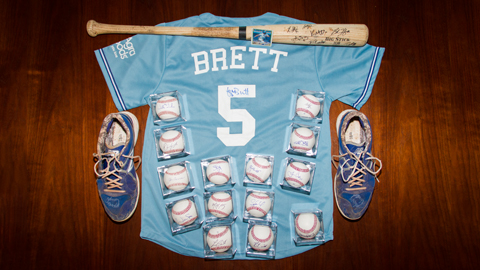 OMAHA, Neb. – The tragic events in Moore, Oklahoma over the past few days have hit close to home with the Omaha Storm Chasers, not only because of the storm and tornado history associated with the state of Nebraska and the Omaha Metro but also due to the Pacific Coast League membership of the Oklahoma City RedHawks, whose home park is located just fifteen minutes away from the city of Moore.

As a way to show their support, the Omaha Storm Chasers will use the remainder of this current homestand that runs through Thursday to attempt to raise money by holding silent auctions of Storm Chasers, Kansas City Royals and Major League Baseball merchandise. All proceeds will go to the relief efforts in Moore, Oklahoma, and fans will have the opportunity to place their bids on items varying from autographed jerseys, baseballs, bats and game-used cleats from MLB Players/Hall of Famers such as:

“Our thoughts are with all those affected by this unthinkable tragedy, and we hope the money raised during the rest of our homestand will help the area of our Pacific Coast League teammate,” said Martie Cordaro, President and General Manager of the Omaha Storm Chasers. “We believe our fans will join us in this effort to help this devastated part of our great country.”

Bids will be accepted during all three remaining games of the homestand, with the option for fans to purchase the item at an elevated donation price. The auction will close following the completion of Thursday’s series finale with the Padres, and the winners of each item will be contacted Friday morning

Also during the remainder of the homestand, the Omaha Storm Chasers will be informing fans in attendance of the ways they can get involved in the relief efforts without bidding on the merchandise. Fans can Text REDCROSS to 90999 to give $10 to American Red Cross Disaster Relief, which helps people affected by disasters such as the recent tornadoes in Oklahoma.

All money that is raised will be donated through the Home Run Foundation of Greater Omaha to the American Red Cross. The final amount will be presented in a ceremony when the Storm Chasers visit the Oklahoma City RedHawks for their series beginning a week from today on May 28. The Storm Chasers players and front office are exploring additional ways to help the affected area of Moore.
This article originally appeared on the official website of the Omaha Storm Chasers. Click here to view the original story.