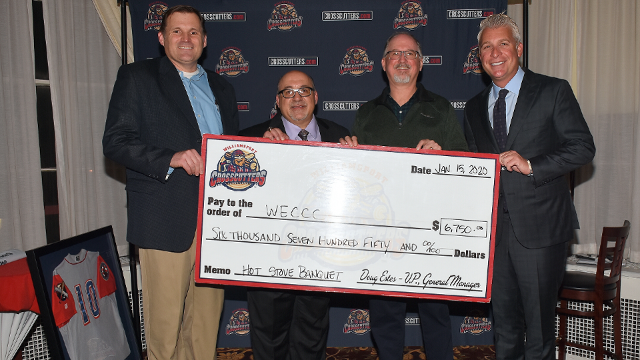 The night, presented in part by Panda Patriot Power, River Valley Transit, WRAK Radio and the Williamsport Sun-Gazette, was also highlighted by auctions that featured a wealth of sports memorabilia.

It was announced at the event that Borders has been reassigned to manage the Phillies full season Class A affiliate, the Clearwater Threshers in 2020. It had been previously announced that Borders would return to manage in Williamsport for a sixth season. As part of the Hot Stove festivities, the Cutters retired Borders jersey number 10. He ends his Williamsport managerial career with 186 wins, the most by any Cutters manager.

Additional highlights included the induction of Rob Thomas into the Bowman Field Hall of Fame and Navy quarterback Hal Spooner’s induction to the Williamsport Sports Walk.

Thomas has been the public address announcer at Cutters home games for the past 20 seasons. Spooner, a Williamsport native helped lead the 1960 Navy Midshipmen to a 9-1 regular season record and a trip to the Orange Bowl

A portion of the proceeds from the evening were donated to the West End Christian Community Center. At the conclusion of the festivities, they were presented with a check for $6,750.

The Crosscutters 2020 home opener is scheduled for Friday, June 19 against the State College Spikes. Season tickets, bonus books and mini-plans are now available by phone, online or in-person at BB&T Ballpark.