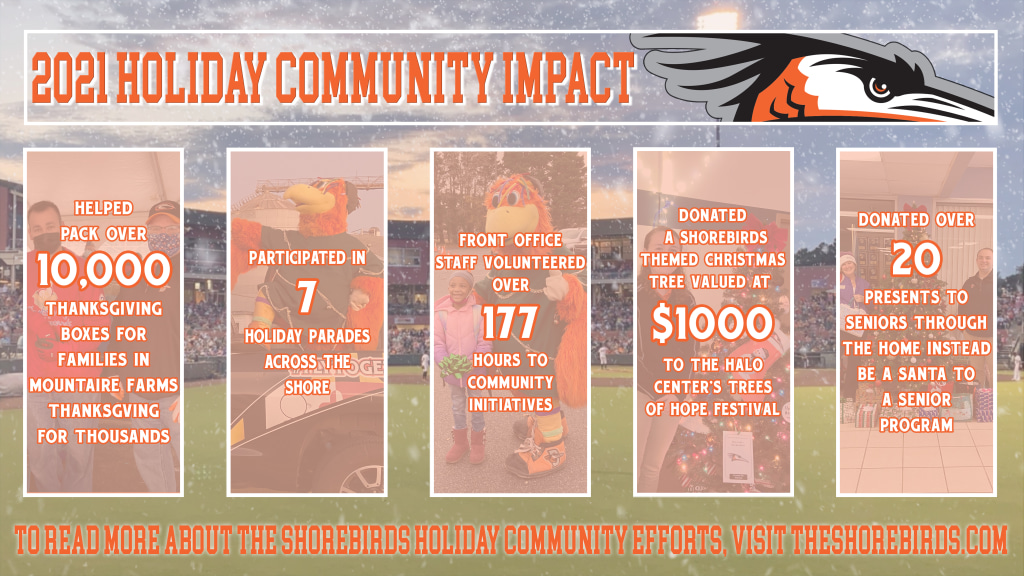 After the silver anniversary season of Delmarva Shorebirds baseball, the ‘Birds were eager to join together with community leaders to keep the good times rolling with an emphasis on creating a positive impact in our community. From packing boxes for those in need, to holiday gift drives, parades, and more,

After the silver anniversary season of Delmarva Shorebirds baseball, the ‘Birds were eager to join together with community leaders to keep the good times rolling with an emphasis on creating a positive impact in our community. From packing boxes for those in need, to holiday gift drives, parades, and more, the Shorebirds carried their mission through the beginning of the offseason to lend a helping hand and spread some holiday cheer to those on Delmarva this holiday season.

An annual tradition, the Delmarva Shorebirds’ front office staff partnered with the Shorebirds’ Fan Club to participate in Salvation Army’s Bell Ringing in front of the Salisbury Walmart this holiday season. By participating in bell ringing, the Shorebirds were able to help the Salvation Army raise holiday funds for families in need in our community, while sharing a smile and holiday cheer with customers and Shorebirds fans.

Next, Sherman and the Shorebirds visited Santa’s Letters in Dagsboro, Delaware to help ring in the Christmas season. This event spread Christmas cheer by allowing kids to play in the winter wonderland, drink hot chocolate, and put their letter to Santa in Santa’s mailbox. Sherman was very excited for Santa to read his letter! Sherman and the Shorebirds enjoyed helping Santa’s Letters spread the joy of the holiday season for those young and old. Despite the cold, Sherman’s feathers kept him warm!

Home Instead’s “Be a Santa to a Senior” Program

At the beginning of December, the Delmarva Shorebirds partnered with Home Instead for their “Be a Santa to a Senior” program. The Shorebirds decorated a Christmas tree in their front lobby and put ornaments from Home Instead that were labeled with gifts that seniors could use this holiday season. With the help of our amazing fans, the Shorebirds were able to give many presents to the seniors in our community through the “Be a Santa to a Senior” Program. Plus, Sherman visited the MAC Center with Home Instead to spread holiday cheer to the seniors as they received their gifts. This wonderful community initiative is something the Delmarva Shorebirds welcomed for the first time this season and plan to join forces with Home Instead for the years to come.

The Shorebirds donated a Shorebirds themed Christmas tree decked out with various memorabilia including Shorebirds bobbleheads, upper reserved tickets to a Shorebirds game, and a Shorebirds Suite Night, all valuing at $1000 to Halo’s first Trees of Hope Festival. The Shorebirds’ Christmas tree along with many other trees donated by organizations across Delmarva were auctioned off with the proceeds benefiting Halo Ministry and their mission of helping those experiencing homelessness in the area.

Sherman and the Shorebirds helped the Jaycees with their annual Christmas Shopping Tour where they spread the Christmas cheer and gave out Christmas gifts to children in the area at the Salisbury Elks Lodge #817. The Jaycees do amazing work in the community each year, and the Shorebirds are always excited for the opportunity to join forces with such a wonderful organization.

Sherman attended Atlantic General Hospital’s annual Penguin Swim in Ocean City on New Year’s Day! He cheered on attendees as they dipped their tail feathers in the ocean. Sherman was a warm, friendly face for the participants who dunked themselves in the frigid waters. The proceeds of the event benefited the hospital and their mission of providing quality care to their community, and Sherman and the Shorebirds were proud to support such an incredible event.

The Delmarva Shorebirds were able to join forces with incredible community members this holiday season to give back to our supportive community and spread holiday cheer. The Shorebirds participated in recurring events that are beloved by the team as well as new ones that the Shorebirds hope to continue year after year. With the 2022 Delmarva Shorebirds’ season quickly approaching, the team will continue to fulfill its mission of making a positive impact on the community as well as gearing up for an exciting 2022 season of Shorebirds baseball that is bound to be one of the best years yet!