Award given to player with significant contributions to community 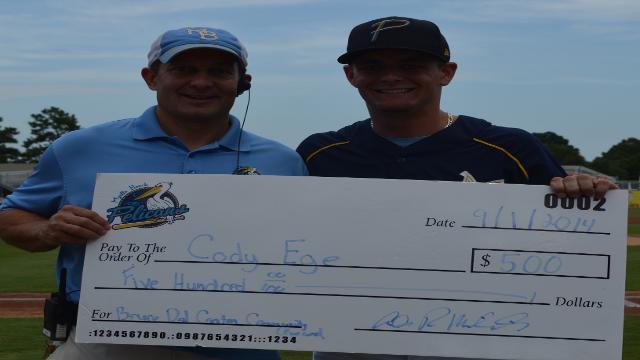 The Myrtle Beach Pelicans, Class A-Advanced affiliate of the Texas Rangers, are pleased to announce that left-hander reliever Cody Ege was named the second-ever recipient of the Bruce Dal Canton Service Award for his efforts in the community this season. He was given the award before the Pelicans regular season finale on Monday at TicketReturn.com Field at Pelicans Ballpark. Catcher Pat Cantwell won the award in 2013.

The award is presented to a player that has demonstrated significant contributions to the Grand Strand community, the Carolina League and the baseball industry as a whole. Cody showed an ongoing commitment to charitable service throughout the season with his involvement in the Pelicans 3-Day Youth Clinic as well as school and summer camp appearances, just to name a few.

“Cody has been an excellent influence on all of the young children that he has worked with this season,” explained Pelicans Senior Director of Marketing Jen Borowski. She went on to add, “most importantly, from our end, he has helped us with every activity that we have asked of him and done it with a smile on his face. I am sure that, if the award was not involved, he still would have been willing to help out; that’s the kind of personality he has-always willing to help out, and he’s a great community leader.”

This award is named after the late Bruce Dal Canton. Bruce Dal Canton was the Myrtle Beach Pelicans Pitching Coach from the inaugural season in 1999 until his passing in 2008. Before joining the Pelicans, Dal Canton was a Major League pitcher for the Pittsburgh Pirates, Kansas City Royals, Atlanta Braves and Chicago White Sox. He coached for 26 years, including ten with the Pelicans, until he prematurely passed away due to esophageal cancer on October 7, 2008. Dal Canton was heavy involved in charitable endeavors and constantly striving to make the community a better place to live, work and play. In 2009, the Pelicans named the home clubhouse after him and retired his number 43, one of just two past Pelicans retired numbers.

Ege was not alone. The Pelicans players and coaches donated countless man-hours in the community with events like the Home Run for Autism Camp, a day with Grand Strand Miracle Leagues, the 3-Day Youth Clinic, the Sanofi Healthy Living outings to two local YMCAs and the Boys and Girls Club of the Grand Strand, as well as food packing initiatives with the Lowcountry Food Bank and the Help4Kids’ Backpack Buddies program.

On a nightly basis, Pelicans players volunteered time before the games to sign autographs to fans behind home plate and caught ceremonial first pitches prior to each Pelicans home game. The Pelicans front office is grateful for all their hard work. Although Ege’s accomplishment is an individual award, the impact that the 2014 Pelicans achieved in the community mirrored the tremendous success of the group on the diamond.

On the field, Ege sported 3.88 ERA and a 4-1 record in 37 outings out of the bullpen for the Pelicans during the regular season. He punched out 76 batters and walked just 17 and had a 46-to-4 strikeout-to-walk ratio during the second half. He did not allow a run in 10 1/3 August innings.