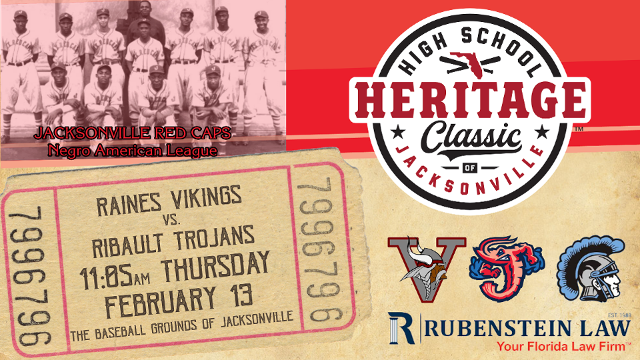 Raines and Ribault student-athletes will wear customized Jacksonville Red Caps uniforms in a tribute to the Negro Leagues team that resided in Jacksonville from 1938-42. The exhibition contest, coincides with the Negro Leagues Baseball Museum’s commencement of the 100th anniversary of the founding of the Negro Leagues, will also feature historical references to Negro Leagues players and teams throughout the game. The winning team will earn the inaugural A. Philip Randolph Cup, commemorating the civil rights activist who moved to Jacksonville in 1891.

“I am so proud to bring this one-of-a-kind game to celebrate the rich history of the Negro Leagues in Jacksonville and honoring the many Negro Leagues players who laid the foundation for our entire industry,” said Jumbo Shrimp executive vice president/general manager Harold Craw. “I want to thank the students and faculty of both Raines and Ribault High Schools for kicking off the Jumbo Shrimp’s year-long commitment to commemorate the Centennial Celebration of the Negro Leagues. We encourage all fans to learn about the extraordinary Negro Leagues players who complete the history of the sport we all love.”

Tickets for the High School Heritage Classic are $5 for reserved seats and $10 for 121 Financial Crustacean Corner seats and a limited number of seats in the PNC Home Plate Club. They can be purchased in-person at the Jumbo Shrimp box office at 301 A Philip Randolph Blvd or online by clicking here.

UP NEXT: The Jumbo Shrimp’s 2020 Home Opening Day is Wednesday, April 15 against the Biloxi Shuckers at the Baseball Grounds of Jacksonville. Season tickets, mini plans and group outings are on sale now. Visit www.jaxshrimp.com or call 904-358-2846 to secure yours today.

ABOUT THE JUMBO SHRIMP: The Jacksonville Jumbo Shrimp offer affordable family fun at the Baseball Grounds of Jacksonville. Their inaugural season garnered the Southern League’s Don Mincher Organization of the Year, Promotional Trophy and Jimmy Bragan Executive of the Year, won by General Manager Harold Craw. The club added its second Promotional Trophy in three years following the 2019 season. To experience the excitement with the terrific value of ticket and group options, call the Jumbo Shrimp at (904) 358-2846 or visit www.jaxshrimp.com.