The Charlotte Knights’ season of giving continued on Thursday, December 20 at the Six Pence Pub in Fort Mill. For over three hours, front office staff members volunteered their time to raise money for the Salvation Army.

The Knights arrived around 5:30 p.m. on Thursday, eager to learn a new trade and give back to the community. With help from seasoned professionals – a.k.a Six Pence Pub bartenders, the crew quickly got the hang of things.

Beginning at 6:00 p.m., staff members served drinks and food to the crowd.

“It was a lot of fun,” exclaimed Leveille. “I learned a few things about bartending and I got to talk to some passionate Knights fans. I may have found my second career!”

Every 30 minutes, Viola rang a bell located behind the bar and announced a raffle prize. Lucky fans won shirts, tickets to a 2013 Knights game, a Knights jersey signed by the 2012 team, a Brian Anderson autographed bat, and more.

“It was great to get behind the bar, serve drinks, announce raffle prizes, and talk to our fans,” stated Viola. “There’s nothing like getting out in the community and meeting Knights fans. It was especially gratifying to know that all of the money we raised was for the Salvation Army.”

Knights Community Relations Director Lindsey Roycraft also played a key role on Thursday. Thanks to her strong ties with the community, events like the one on Thursday are made possible.

“It was a very positive event,” said Roycraft. “I look forward to working with Ray and the entire Six Pence Pub staff again during our upcoming 2013 season. Next time, we’ll bring a Knights player or two.”

Overall on Thursday, the Knights and Six Pence Pub raised $625.00 for the Salvation Army. 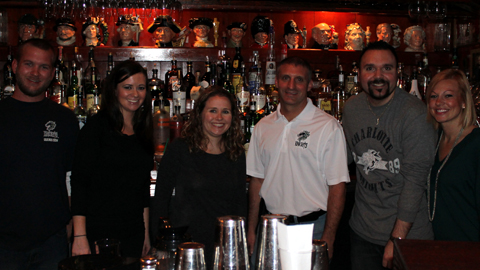 Members of the Knights front office volunteered their time on Thursday, December 20.Earlier in December, the Knights held a toy and coat drive at Knights Stadium during the team’s first-ever “Winter Wonderful” event. The team also worked with Angel Tree this year to make sure two boys received all of the presents they asked for this year.

Over the next couple of weeks, staff members will volunteer at the Men’s Shelter of Charlotte and Classroom Central.

“Volunteering and giving back is a big part of what we enjoy doing,” added Roycraft. “We look forward to keeping that going in 2013 and beyond.”

This article originally appeared on the official website of the Charlotte Knights.  Click here to view the original story.