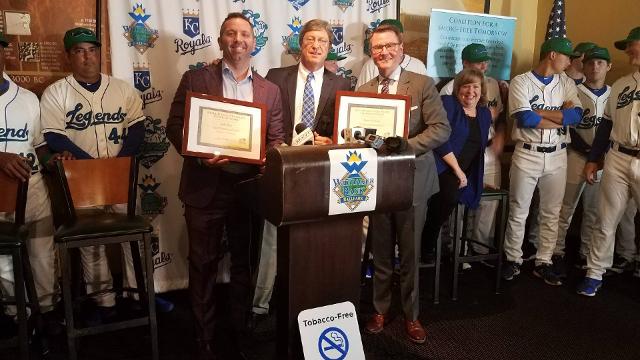 “Almost 15 years ago, Lexington became the first city in the state to enact a smoke-free ordinance. The results were almost immediate, with fewer smoking related emergency room visits and a better quality of life. This new tobacco-free policy at Whitaker Bank Ballpark and our city-owned and operated ball fields is a logical next step,” said the honorable Jim Gray, Mayor of Lexington.

Whitaker Bank Ballpark will be a smoke free environment for the first time in the stadium’s history. Baseball and tobacco have gone hand in hand for decades, with chew being the most noticeable tobacco product, but new initiatives, led by the Campaign for Tobacco-Free Kids, are trying to change that. Extended use of tobacco products including cigarettes, chew, snuff and other products have been proven to have long-term negative health effects.

“Lexington is once again taking the lead on health when it comes to protecting residents from the dangers of tobacco use,” said Ben Chandler, President and CEO of the Foundation for a Healthy Kentucky. “By making all city ball fields tobacco-free, including Whitaker Bank Ballpark, Mayor Gray and Andy Shea are sending a powerful message to young baseball players looking to emulate their hometown baseball idols: tobacco use is unsafe, unhealthy, and not at all cool.”

Lexington has been on the forefront of enacting tobacco-free legislation in the state of Kentucky, with Whitaker Bank Ballpark and the Legends taking the next step of prohibiting tobacco products inside the gates. Previous smoking areas, such as behind the bleachers in left field, will no longer be designated smoking areas. There will also be no smoking on the suite level. All types of tobacco products such as cigarettes and vapes, are not allowed.

“We are very proud to be one of the first Minor League Baseball facilities in the country to go tobacco-free. Being one of the premiere family entertainment options in the region, we felt this move had to be made. We are honored to lead the way in making the Central Kentucky community a healthier and happier place to live,” said Legends President/CEO, Andy Shea.

Fans will be able to smoke outside the facility on the first base side, behind the Stables, in the fenced in area.

About the Foundation for a Healthy Kentucky

Funded by an endowment, the mission of the nonpartisan Foundation for a Healthy Kentucky is to address the unmet health needs of Kentuckians by developing and influencing policy, improving access to care, reducing health risks and disparities, and promoting health equity. Since the Foundation opened its doors in 2001, it has invested more than $27 million in health policy research, advocacy, and demonstration project grants across the Commonwealth Follow the Foundation on Twitter, Facebook and YouTube, and visit www.healthy-ky.org.

About the Lexington Legends

The Legends, a Class A affiliate of the Kansas City Royals and member of the South Atlantic League, kickoff the 2018 season at Whitaker Bank Ballpark against the Charleston RiverDogs, an affiliate of the New York Yankees, on Opening Day – April 5, 2018. For ticket information, call (859) 422-7867 or visit LexingtonLegends.com. All individual game tickets are now on sale.