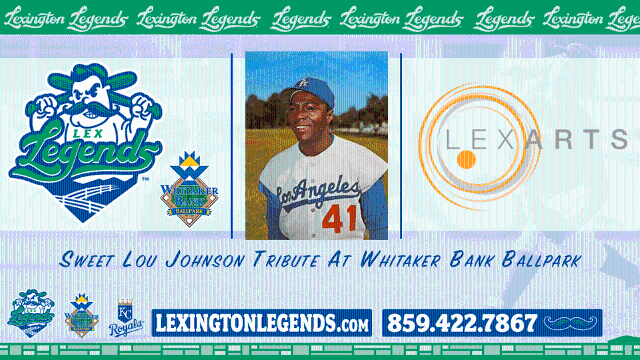 WHITAKER BANK BALLPARK (Lexington, KY) – In partnership with LexArts Inc. and the Lexington Legends, Legends President/CEO Andy Shea announced to the Sweet Lou Johnson Lexington Chapter of the Society of American Baseball Research that the Legends are currently searching for an artist from the region (Kentucky and contiguous states) to create a piece to honor Lexington native, and World Series hero, “Sweet” Lou Johnson.

Sweet Lou Johnson was born in Lexington and attended Dunbar High School. He signed as a free agent for the New York Yankees in 1953, and saw his first major league action in 1962 with the Milwaukee Braves. Johnson was then traded to the Los Angeles Dodgers and subsequently led the Dodgers to a World Series victory in 1965, hitting the game winning home run in a decisive game seven. After various injuries, Johnson retired from baseball in 1970. He ended his career batting .258 with 48 home runs, 232 RBI and 50 stolen bases.

The partnership between the Legends and LexArts Inc. began in 2017 after the Legends hosted an On The Table event. Community members voiced their opinions of ways to improve the city in different capacities to make it more vibrant and engaged. During the same time, Lexington Mayor Jim Gray called for a more diverse narrative for public art, which led to the idea of incorporating Sweet Lou Johnson into Whitaker Bank Ballpark. The Legends and LexArts Inc. applied, and received, a grant from Blue Grass Community Trust Foundation to begin the first phase of the project to seek proposals from artists around the region. They not only wanted to honor Lexington’s history, but the incredible contribution that Sweet Lou Johnson made to the game of baseball.

“It is an honor to have the opportunity to pay homage to Lou Johnson. Not only will this showcase Johnson and the impact he had in the world of baseball, but also bring together sports and the arts at Whitaker Bank Ballpark.” said Legends President/CEO Andy Shea. “We are proud to be able to honor this part of Lexington history and showcase the contribution that Sweet Lou Johnson made to baseball.”

The project will consist of two phases:

The Request for Qualifications / Proposals will seek to identify artists in the region that are interested in creating work to celebrate Lou Johnson. Artists must provide resume, past work and a cover letter that identifies the type of work they would create, what materials it would use and describe concept.

Three artists will be paid $500 to further develop their concepts and provide a rendering.

The three finalists’ proposals will be displayed for the public to see at the Whitaker Bank Ballpark in late Spring 2018. One proposal will be selected to be realized.

The deadline for qualifications is April 7, 2018 and artists will be notified by April 13. Final proposals will be due May 31 and then the proposals will be viewed by the public June 1-21 at Whitaker Bank Ballpark at Lexington Legends games.

The anticipated budget for the project will be $50,000 which includes artist fee and travel, materials and installation.

All interested artists should visit www.lexarts.org/participate/artists/ for more information and to submit their applications. All artists must go through LexArts Inc. with their submissions.

The Legends, a Class A affiliate of the Kansas City Royals and a member of the South Atlantic League, kickoff the 2018 season at Whitaker Bank Ballpark against the Charleston RiverDogs, an affiliate of the New York Yankees, on Opening Day – April 5, 2018. For ticket information, call (859) 422-7867 or visit LexingtonLegends.com