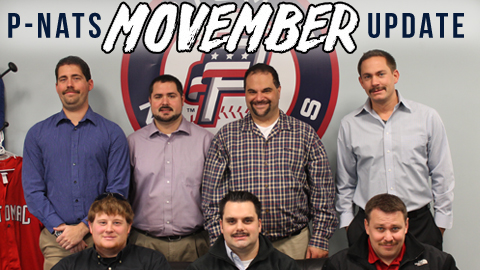 Woodbridge, VA-In support of Movember, a global charity which raises funds and awareness to assist in proliferating men’s health, male members of the Potomac Nationals front office along with their female counterparts, dubbed Mo Sistas, are proud to announce its Team Nationals Mo Bros yielded a $2,000 donation to support the Movember movement.

Throughout Movember, the P-Nats front office encouraged Nationals fans, family, friends, colleagues, and business partners to join this worldwide initiative in an effort to place the spotlight on men’s health issues including prostate and testicular cancer as well as mental health challenges.

By wearing a mustache for an entire month, Team Nationals Mo Bros members were able to spark a conversation about the Movember charity, and in turn its purpose and impact, while soliciting funds to support this great cause.

Those who donated then grew their own “Mo” and spread the network’s Movember message.

From one mustache to another, funds were sprouted that will be used to facilitate Movember’s effort to catalyze the awareness and education of men’s health issues across the world.

“In Minor League Baseball, I’ve been a part of many fundraising efforts, and in this case, Movember was certainly a terrific way for our staff to raise funds for a great cause, and through their excellent effort, we were able to hit our donation goal,” said Potomac Nationals Vice President/General Manager, Josh Olerud.

“We had a blast participating, and it was a great way to boost off-season cohesion among our front office members. We look forward to building off our first Movember, and creatively we will get even more fans involved next year.”

To generate the Movember buzz among members of the P-Nats fan base, the Nationals rewarded their faithful for donating to the charity with prize packages that included 2014 Opening Day tickets, Pfitzner Stadium food vouchers, P-Nats hats, first pitch opportunities, and player autographs.

As Movember organizers tally the final global contribution to the movement from over 200,000 Mo Bros and Mo Sistas which is expected to be in excess of $20 million, the Potomac Nationals are counting down to the start of Movember 2014 which is only ten and a half months away.

An official global charity, Movember’s vision is to have an everlasting impact on the face of men’s health. During November each year, Movember is responsible for the sprouting of millions of moustaches on men’s faces around the world. Through the power of the Mo, vital funds and awareness are raised to combat prostate and testicular cancer and mental health challenges.

The Movember Effect
Globally, the funds raised by our Mo Bros and Mo Sistas support world-class men’s health programs that combat prostate and testicular cancer and mental health challenges. These programs, directed by the Movember Foundation, are focused on awareness and education, living with and beyond cancer, staying mentally healthy, living with and beyond mental illness and research to achieve our vision of an everlasting impact on the face of men’s health.

Movember- A Global Movement
Since its humble beginnings in 2003 in Melbourne, Australia, Movember has grown to become a truly global movement inspiring more than 3 Million Mo Bros and Mo Sistas to participate across 21 countries worldwide. Movember is also aware of Mo Bros and Mo Sistas supporting the campaign and men’s health causes in other parts of the world, from Moscow to Rio de Janeiro, and everywhere in between.

Find out more about the Movember Movement at www.Movember.com.

The Potomac Nationals of the Carolina League play at Pfitzner Stadium in Woodbridge, Virginia, and are the Class-A Advanced affiliate of the Washington Nationals. P-Nats 2014 season tickets and mini plans are now on sale. Sponsorship opportunities for the 2014 season and beyond are available. Plan your corporate outing now for the 2014 season to see the future stars of the Washington Nationals at The Pfitz as the P-Nats offer discounted group rates and all-inclusive picnic options. Visit the P-Nats online at www.potomacnationals.com or call the Potomac Nationals Ticket Office at 703-590-2311 for more information!

This article originally appeared on the official website of the Potomac Nationals. Click here to view the original story.