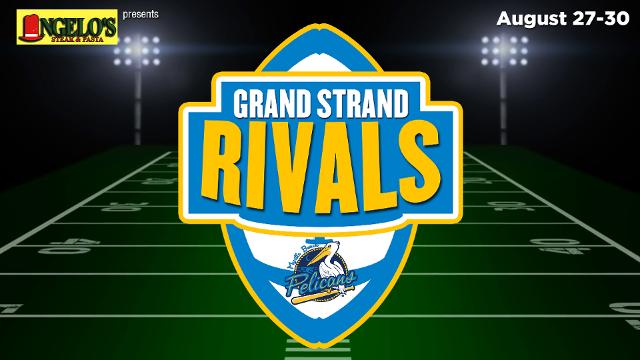 MYRTLE BEACH, S.C. (August 22, 2018) – The Myrtle Beach Pelicans are giving back to area high schools through their rivalry series this coming week, August 27-30. Fans can purchase tickets online through MyrtleBeachPelicans.com/rivals. A portion of the proceeds from tickets purchased through this link will be donated to the school of their choice.

On Monday, the battle will be between Georgetown and Waccamaw High Schools. Carolina Forest and Conway collide on Tuesday while Wednesday features Socastee versus St. James. The Pelicans’ home slate concludes on Thursday with the Myrtle Beach and North Myrtle Beach rivalry.

As part of Grand Strand Rivals Week courtesy of Angelo’s Steak and Pasta, each game will feature between-inning match-ups between the schools. All game times are 7:05 p.m. against the Buies Creek Astros. Gates will open at 6 p.m.

Tickets are on sale now and are available online at MyrtleBeachPelicans.com/rivals

The 2018 season is the 20th season for the Pelicans franchise and fourth as the Class A-Advanced affiliate of the Chicago Cubs. For tickets visit MyrtleBeachPelicans.com/softball, call (843) 918-6000, or visit the Pelicans Box Office.

ABOUT THE PELICANS: The Myrtle Beach Pelicans are the Class A-Advanced affiliate of the Chicago Cubs and play their home games at TicketReturn.Com Field at Pelicans Ballpark in Myrtle Beach, South Carolina. Since being acquired by a group led by Chuck Greenberg during the 2006 season, the Pelicans have repeatedly set team attendance records and become known as one of Minor League Baseball’s most innovative and creative franchises. The team and its employees have been dedicated to making a difference in the Myrtle Beach community, specifically giving back over $2 million in donations, fundraising proceeds, in-kind services and community service since launching the Pelicans Play It Forward Community Initiative in 2013. TicketReturn.Com Field at Pelicans Ballpark has ranked in the top eight in all of Minor League Baseball by Stadium Journey in six of the last seven seasons. The same publication also placed the Pelicans in the Top 100 Stadium Experiences and the best in the Carolina League for six of the past seven seasons. In June 2017, the Pelicans won the 2017 TripAdvisor.com Certificate of Excellence award. On the field, the team has won four Mills Cup Championships, including claims to back-to-back titles in 1999 and 2000, and again in 2015 and 2016. The Pelicans have made 11 postseason appearances behind 13 half-season Southern Division championships, including the first half of the 2015 season, second half of 2016 and first half of 2017. For more information on the Myrtle Beach Pelicans, please contact the Pelicans at (843) 918-6000 or email Info@MyrtleBeachPelicans.com.