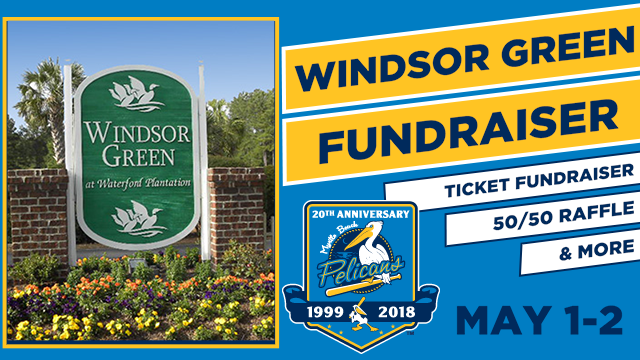 MYRTLE BEACH, S.C. (April 25, 2018) – In the wake of the fire at Windsor Green Apartments in Carolina Forest earlier this month, the Myrtle Beach Pelicans are raising funds for the displaced residents. The team is holding a ticket sales fundraiser in which fans can purchase a ticket to May 1 and 2 online at myrtlebeachpelicans.com/tickets using the promo code “WG”. $5.00 from every ticket purchased with that promo code will be donated to those affected by the fire. The team will also donate proceeds from the 50/50 raffle on those nights. Additionally, anyone wishing to make a donation to the affected residents can do so at the ballpark that evening.   Donations are being accepted in the form of cash, gift cards and toiletries. It has been asked that no clothes be donated.

Gates will open at 6:00 p.m. for a 7:05 p.m. first pitch on both nights. Other promotional offers include $2 tacos and tallboys until 8pm on Tuesday, and BOGO hot dogs on Wednesday. The 2018 season is the 20th season for the Pelicans franchise and fourth as the Class A-Advanced affiliate of the Chicago Cubs. For tickets visit MyrtleBeachPelicans.com/tickets, call (843) 918-6000, or visit the Pelicans Box Office.

ABOUT THE PELICANS: The Myrtle Beach Pelicans are the Class A-Advanced affiliate of the Chicago Cubs and play their home games at TicketReturn.Com Field at Pelicans Ballpark in Myrtle Beach, South Carolina. The park has ranked in the top eight in all of Minor League Baseball by Stadium Journey in six of the last seven seasons. The same publication also placed the Pelicans in the Top 100 Stadium Experiences and the best in the Carolina League for six of the past seven seasons as well. In June 2017, TicketReturn.Com Field at Pelicans Ballpark won the 2017 TripAdvisor.com Certificate of Excellence award. The Pelicans have won four Mills Cup Championships, including claims to back-to-back titles in 1999 and 2000, and again in 2015 and 2016. The Pelicans have made 11 postseason appearances behind 13 half-season Southern Division championships, including the first half of the 2015 season, second half of 2016 and first half of 2017. For more information on the Myrtle Beach Pelicans, please contact the Pelicans at (843) 918-6000 or emailing Info@MyrtleBeachPelicans.com.