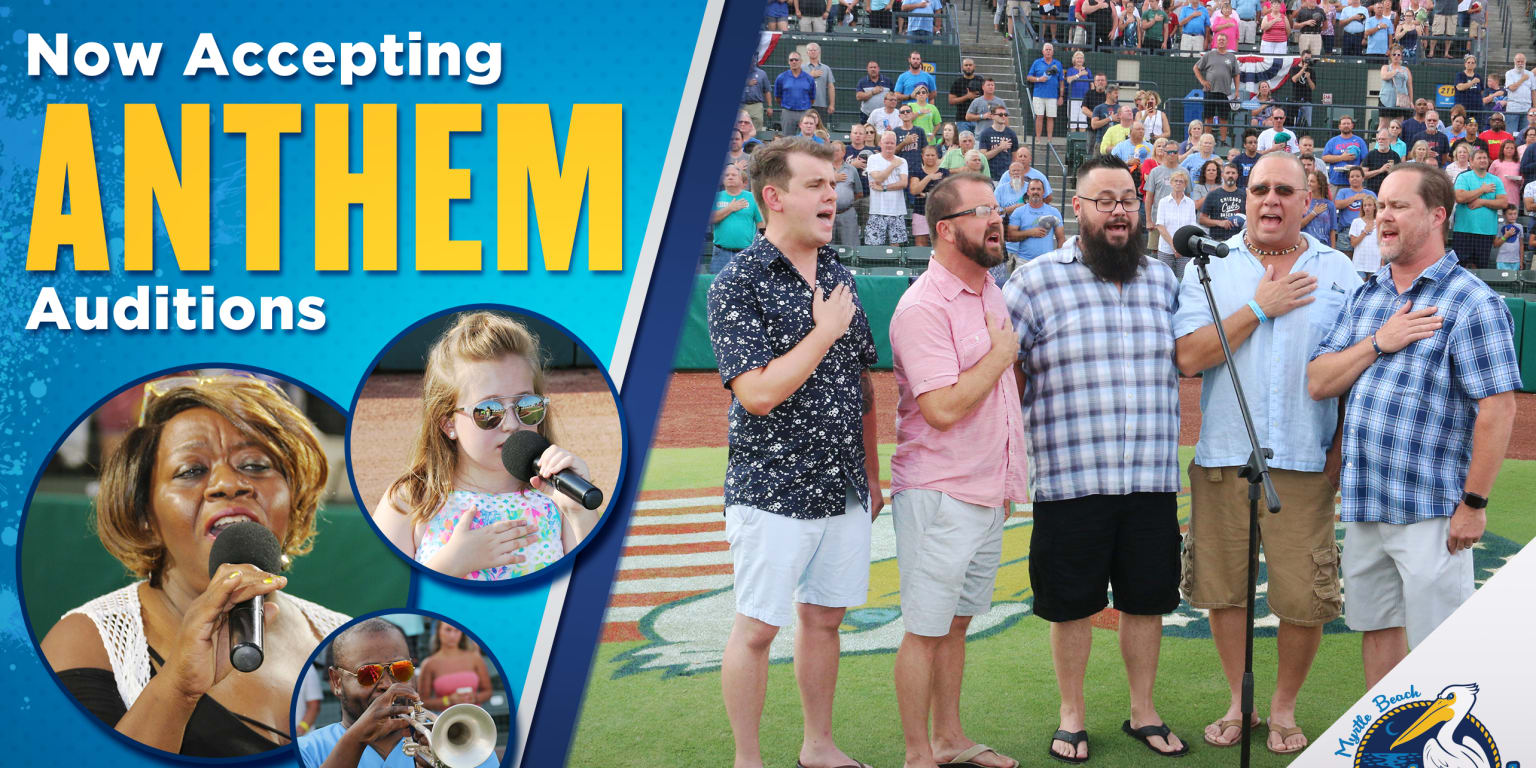 mit their video HERE. All ages are welcome to submit, however, a submission does not guarantee a spot to perform during the season.

Vocalists, musicians and groups are welcome to submit. Please note that all vocalists mus sing without a music track. Additionally, all performances must be 90 seconds or less. Submissions will be accepted through March 27 at midnight.

For more information, please contact the Pelicans Front Office at 843-918-6000

The Pelicans’ 2020 season will begin at home on April 9 against the defending Carolina League Champion Wilmington Blue Rocks. The 2020 season marks the 22nd year for the Pelicans on the Grand Strand and the sixth year as the Class A-Advanced affiliate of the Chicago Cubs. Season Ticket packages are currently available online at MyrtleBeachPelicans.com, by phone at (843) 918-6000, or in person at the Pelicans Front Office. Single-game tickets will be available beginning March 12 during the team’s Thirsty Thursday Ticket Party from 4PM-7PM. Admission is free and the event features live music from Cornbread, $1.00 Bud and Bud Light drafts, $2.00 craft drafts, and 1/2 price Duplin Winery wines until 7:00 p.m., when the event concludes. All tickets will go on-sale March 13 at 10AM.

ABOUT THE PELICANS: The Myrtle Beach Pelicans are the Class A-Advanced affiliate of the Chicago Cubs and play their home games at TicketReturn.Com Field at Pelicans Ballpark in Myrtle Beach, South Carolina. Since being acquired by a group led by Chuck Greenberg during the 2006 season, the Pelicans have repeatedly set team attendance records and become known as one of Minor League Baseball’s most innovative and creative franchises. The team and its employees have been dedicated to making a difference in the Myrtle Beach community, specifically giving back over $2.4 million in donations, fundraising proceeds, in-kind services and community service since launching the Pelicans Play It Forward Community Initiative in 2013. TicketReturn.Com Field at Pelicans Ballpark has ranked in the top eight in all of Minor League Baseball by Stadium Journey in six of the last seven seasons. The same publication also placed the Pelicans in the Top 100 Stadium Experiences and the best in the Carolina League for six of the past seven seasons. In June 2017, the Pelicans won the 2017 TripAdvisor.com Certificate of Excellence award. On the field, the team has won four Mills Cup Championships, including claims to back-to-back titles in 1999 and 2000, and again in 2015 and 2016. The Pelicans have made 11 postseason appearances behind 13 half-season Southern Division championships, including the first half of the 2015 season, the second half of 2016 and the first half of 2017. For more information on the Myrtle Beach Pelicans, please contact the Pelicans at (843) 918-6000 or email [email protected].