The Clearwater Regional Chamber of Commerce awarded the Phillies organization with the first-ever Phillies “All-Star In The Community” Award this past Thursday night at the Clearwater Regional Chamber of Commerce annual dinner. The award has been designated to honor those that show overall commitment to the local community as well as support for its businesses.

Accepting the achievement was Philadelphia Phillies President and CEO David Montgomery and Director of Florida Operations John Timberlake. The Phillies are set to begin their 64th year of spring training in Clearwater and have built strong ties in the local community.

This past year, the Phillies along with the Threshers have contributed to over 75 charities and events. It was because of this that the Chamber of Commerce decided to not only award the organization, but to name the award in their honor. The award will not be given out yearly, but on merit to organizations or businesses that meet the criteria as set by the Phillies.

The Threshers will continue to donate and work with charities this season through various promotions and events such as Bark at the Ballpark, where fa

ns can bring their dogs to Bright House Field to raise money for the Humane Society of Pinellas County and Pitch for Pink night on August 6th which will benefit Morton Plant Mease breast cancer programs. 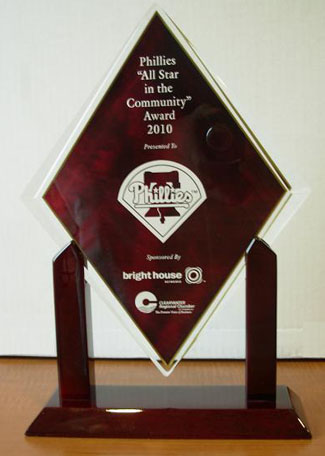