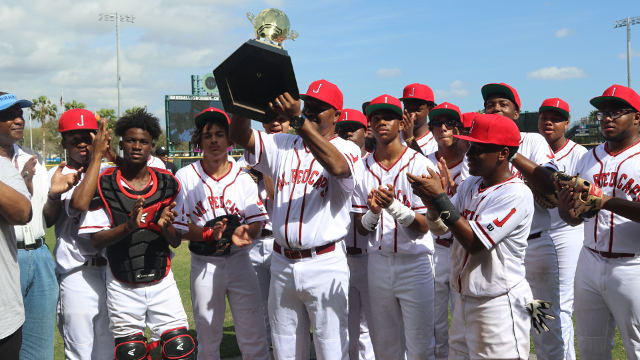 JACKSONVILLE, Fla. – The Raines High School Vikings beat the Ribault High School Trojans 8-4 on Thursday to win the inaugural High School Heritage Classic presented by Rubenstein Law Firm, taking the A. Philip Randolph Cup in the exhibition contest at The Home of the Jumbo Shrimp.

“I want to congratulations Raines High School on winning the A. Philip Randolph Cup and Ribault High School on an excellent game,” said Jumbo Shrimp executive vice president/general manager Harold Craw. “The Jumbo Shrimp want to extend a huge thank you to everyone who helped make the High School Heritage Classic such a huge success in kicking off our team’s Centennial Celebration of the Negro Leagues.”

UP NEXT: The Jumbo Shrimp’s 2020 Home Opening Day is Wednesday, April 15 against the Biloxi Shuckers at the Baseball Grounds of Jacksonville. Season tickets, mini plans and group outings are on sale now. Visit www.jaxshrimp.com or call 904-358-2846 to secure yours today.

ABOUT THE JUMBO SHRIMP: The Jacksonville Jumbo Shrimp offer affordable family fun at the Baseball Grounds of Jacksonville. Their inaugural season garnered the Southern League’s Don Mincher Organization of the Year, Promotional Trophy and Jimmy Bragan Executive of the Year, won by General Manager Harold Craw. The club added its second Promotional Trophy in three years following the 2019 season. To experience the excitement with the terrific value of ticket and group options, call the Jumbo Shrimp at (904) 358-2846 or visit www.jaxshrimp.com.