Everyone needs someone to lean on in a time of need. For Lowcountry residents, the chaplains and volunteers of the Coastal Crisis Chaplaincy have answered that call by fulfilling their mission to serve, comfort, and minister since 1991.

On Saturday, September 3, the Charleston RiverDogs and Raising Cane’s restaurant were happy to announce that they have assisted the Coastal Crisis Chaplaincy through the club’s nightly launch-a-ball promotion.

By purchasing tennis balls to lob onto the Riley Park diamond during the postgame, fans have contributed $1,500 to the organization. Thanks to a matching offering from Raising Cane’s, representatives from the restaurant and RiverDogs General Manager Dave Echols were able to present a $3,000 donation to help fund the generosity of The Coastal Crisis Chaplaincy.

“The selfless members of the Coastal Crisis Chaplaincy serve as yet another example of the tight-knit and caring nature of the Charleston community,” said Echols. “We were happy to lend a helping hand to the service through a fun program, and are equally excited that Raising Cane’s stepped up to further the cause.”

The 2007 Sofa Super Store fire which claimed the lives of nine of the Holy City’s bravest firemen was just one of the many times the Coastal Crisis Chaplaincy has emerged to provide moral support in a time of crisis. The 24-7 pastoral care and counseling service tends to the families of law enforcement and emergency service agencies, as well as the general public, on an almost daily basis. 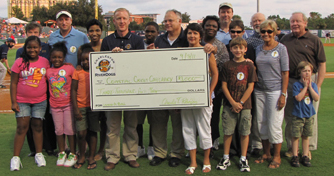