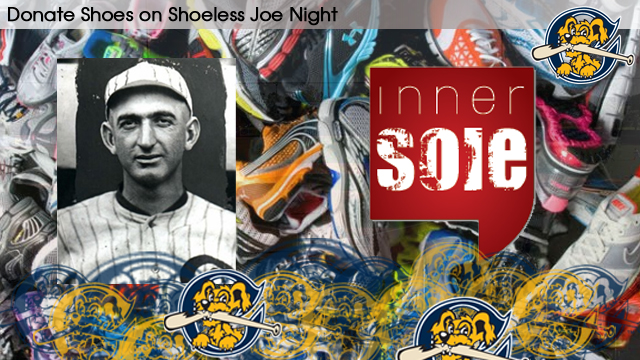 CHARLESTON, S.C. – Donate a new or used pair of sneakers and we’ll give you a free ticket to see the Charleston RiverDogs battle rival Greenville Drive on Saturday, May 16, in what will be one of the most unique starts in baseball history.

At this game, the Charleston RiverDogs will salute Greenville native “Shoeless “Joe Jackson with several promotions.

First, fans who bring a pair of new or used sneakers to donate to University of South Carolina women’s basketball coach Dawn Staley’s INNERSOLE non-profit organization, will gain free admission to the game, which begins at 6:05 pm.

And then prior to the game, both the RiverDogs and Drive will take the field for the National Anthem lined up on the first and third base lines – of course – shoeless. The teams will also take a shoeless photo in front of Shoeless Joe’s Hill in right field.

“This night is a great opportunity to remember Shoeless Joe Jackson,” said RiverDogs sales representative Will Senn, who is responsible for coordinating the promotion and cultivating the relationship with INNERSOLE. “We’re thrilled that we’ve partnered with Coach Staley and INNERSOLE on this special night, in order to raise awareness and support for those in need.”

INNERSOLE is a non-profit organization whose mission is to provide new sneakers to children who are homeless and children who are in need. This is a national and international initiative that will make a difference in the lives of our children by starting the school year off with a new pair of sneakers. Coach Staley serves as co-founder and president of INNERSOLE.

“The partnership with the Charleston RiverDogs is a perfect example of how the community can partner with INNERSOLE and help us bring awareness to the challenges that homeless and underprivileged children face on a constant basis,” said Coach Staley. “One of our goals for INNERSOLE is to have a presence in every area of our State. The opportunity to partner with the Charleston RiverDogs and share our SOLE mission is just another step in that direction.”

“Shoeless Joe” Jackson played Major League baseball in the early part of the 20th century. He is remembered for his performance on the field and for his alleged association with the Black Sox Scandal, in which members of the 1919 Chicago White Sox participated in a conspiracy to fix the World Series. As a result of Jackson’s association with the scandal, Kenesaw Mountain Landis, Major League Baseball’s first commissioner, banned Jackson from playing after the 1920 season. Since then, Jackson’s guilt has been disputed, and his expulsion from baseball during the prime of his career made him one of the game’s legendary figures.

Jackson played for three Major League teams during his 12-year career. He spent 1908-09 as a member of the Philadelphia Athletics and 1910 with the minor league New Orleans Pelicans before joining the Cleveland Naps at the end of the 1910 season. He remained in Cleveland through the first part of the 1915 and played the remainder of the 1915 season through 1920 with the White Sox.

Jackson, primarily a left fielder, currently has the third-highest career batting average in major league history. In 1911, Jackson hit for a .408 average, and it remains as the sixth-highest single-season total since 1901, which marked the beginning of the modern era. Babe Ruth reportedly said that he modeled his hitting technique after Jackson’s.

For additional information and to secure your tickets, please refer to www.riverdogs.com or contact the box office at (843) 577-DOGS (3647). If you can’t make the games, remember that RiverDogs baseball can be heard throughout the season on the flagship radio home, WTMA 1250AM.

This article originally appeared on the official website of the Charleston RiverDogs. Click here to view the original story.