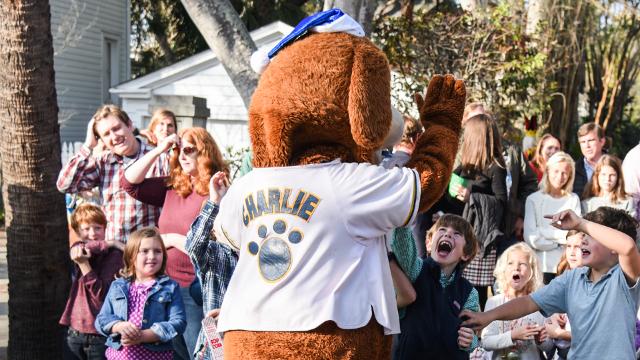 CHARLESTON, S.C. – Charlie and the RiverDogs are asking fans to help give back this holiday season. The club will be accepting donations of unopened toys at Riley Park all this week as they open their gates for the Charlie Claus Toy Drive to benefit the MUSC Shawn Jenkin’s Children’s Hospital.

“After cancelling our original Charlie Claus event due to weather this past weekend, we wanted to come up with an alternative for our fans to give back this holiday season,” said RiverDogs Community Relations Director Walter Nolan-Cohn. “We would like to thank our fans in advance for their show of support. These donations are a wonderful way to make an impact in the Lowcountry community.”

The four-day long toy drive will run from Monday, December 11 through Thursday, December 14 between the hours of 9am and 4:30pm. Fans are encouraged to donate a new, unopened toy that can be dropped off inside the main gate on Fishburne St. or inside the front office lobby. Every family that donates a toy will also receive a family four-pack (includes four tickets, four hot dogs, four drinks and four bags of chips) for a RiverDogs game in 2018.

The week will also culminate with a meet-and-greet featuring Charlie T. RiverDog, Chelsea, and Santa Claus on Thursday, December 14 from 5:30-6:30 in the RiverDogs clubhouse. Families will have the opportunity for photos and to meet the RiverDogs’ signature mascots along with Santa himself.

Charlie will deliver the donated toys from the week’s efforts to the children’s hospital on Wednesday, December 20.

For more information on the Charlie Claus Toy Drive and meet-and-greet, please contact Walter Nolan-Cohn at 843-723-7241 or by email at walter@riverdogs.com.

RiverDogs season tickets, half-season ticket packages, and flex plans, including options to the Riley Park Club, are now available for the 2018 campaign. The RiverDogs begin the season on April 12 when they host the Kannapolis Intimidators at The Joe, preceded by a weeklong road trip and an exhibition opener at The Joe on April 3 against Myrtle Beach. Ticket information can be secured by contacting the box office at (843) 577-DOGS (3647) or online at www.riverdogs.com/tickets.