Miracle pitcher shows versatility on and off the field in 2014 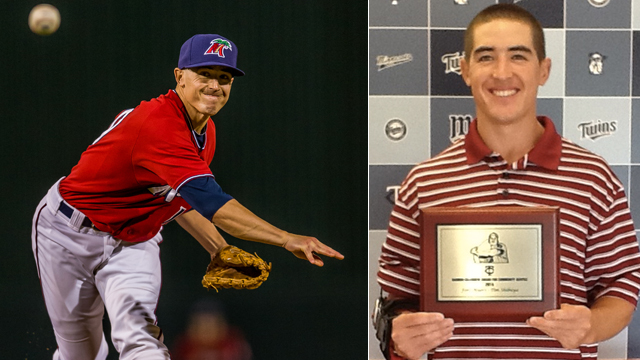 In September, the Minnesota Twins announced that pitcher Tim Shibuya was selected as the Harmon Killebrew Award for Community Service recipient for the Fort Myers Miracle in 2014.

Shibuya, 25, was a 23rd round draft pick of the Twins in 2011 out of the University of California-San Diego. Shibuya participated in multiple youth baseball camps as an instructor and also appeared at numerous events in Lee and Collier County throughout the season.

“It was great having Tim join us on appearances this past season,” said Miracle Manager of Community Relations Ashley Adams. “He is a hands-on, personable and active with kids. Tim makes the time with the Miracle memorable for them and our staff too.”

On the field, Shibuya posted a 7-4 record with a 3.64 earned run average in 28 games, 10 starts. Tossing a total of 89 innings, Shibuya walked just 11 hitters and tallied 59 strikeouts. In his minor league career, Shibuya has made 74 appearances and has a career ERA at 3.62.

The Killebrew Award honors the long time Twins great and Hall of Famer Harmon Killebrew. Each season, the General Manager and Field Manager of the four full-season affiliates nominate a candidate that best exemplified the compassion and spirit of Killebrew through work in the local community.

Former Miracle pitcher Logan Darnell was the recipient for the Triple-A Rochester Red Wings. Tony Thomas was awarded the honor for the Double-A New Britain Rock Cats and Tanner Vavra the winner for the Single-A Cedar Rapids Kernels.

This article originally appeared on the official website of the Fort Myers Miracle. Click here to view the original story.