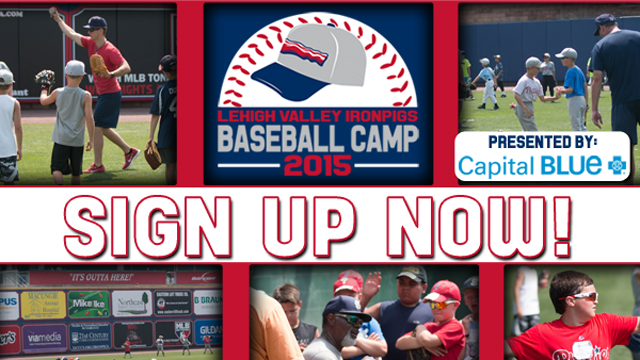 Learn from the Pro’s This Summer at Coca-Cola Park

Sign-ups are now underway for the 2015 Youth Baseball Camp presented by Capital BlueCross! Make sure to sign up early because each camp is limited to 110 children and each is expected to sell out.

The camps will run from 9 a.m. to 12:30 p.m. for all days of the session. Boys and girls of all skill levels will have the chance to learn baseball and fundamentals from the future stars of the Philadelphia Phillies. Each day, members of the IronPigs coaching staff and select IronPigs players will teach the basics of the game and help all campers become better ballplayers!

In addition to meeting and playing with IronPigs players, each camper will receive a daily lunch, two tickets to a selected IronPigs game during the camp (Camp #1, June 17; Camp #2, June 30; Camp #3, July 23), on-field recognition prior to the IronPigs game and an official IronPigs Fantasy Camp T-shirt!