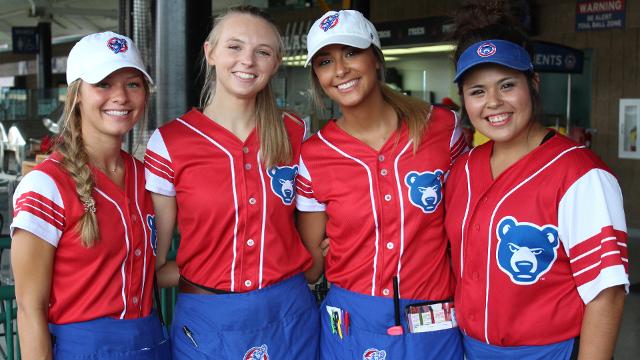 SOUTH BEND, IN – Now is your chance to join a championship winning team! The South Bend Cubs are looking for energetic and customer service focused individuals to work at Four Winds Field this summer. Applications can be submitted through the online portal or by filling out an application at the South Bend Cubs main office.

The streamlined application, added last season, has been designed with mobile devices in mind, making it accessible and easy for anyone to complete. All applications will be reviewed by the South Bend staff and those whose qualifications match the desired needs will be contacted to set up an interview.

There are 15 different positions across eight departments that the South Bend Cubs are looking to fill. Some of the available positions include gameday ambassador, ticket seller, hospitality host, parking attendant, custodial services, fun zone employee, concessions team member, and more.

“The reason we have become a summer destination for people across the region is because our gameday staff creates a fun and exciting place to visit,” South Bend Cubs Vice President and General Manager Nick Brown said. “It’s the gold-standard guest service that keep our fans coming back year after year. We’re looking for people who are passionate, energetic, and customer service focused to join our team.”

The South Bend Cubs will open the 2020 season by hosting the Lake County Captains for a three-game series beginning on Thursday, April 9.

The South Bend Cubs are the Class A minor league affiliate of the 2016 World Series Champion Chicago Cubs. Over the past 32 seasons, the team has won four Midwest League titles, most recently in 2019, and has captured eight division titles. In 2019, the South Bend Cubs hosted the Midwest League All-Star Game. In June 2017, Four Winds Field, home of the South Bend Cubs, was voted Best Class A ballpark in the country by Ballpark Digest. In 2015 the team was named Ballpark Digest’s Team of the Year and received the John H. Johnson President’s Award, the highest award in minor league baseball. The team is owned and operated by Swing-Batter-Swing, LLC whose principal shareholder is Andrew T. Berlin of Chicago, Ill. More information is available at www.SouthBendCubs.com.