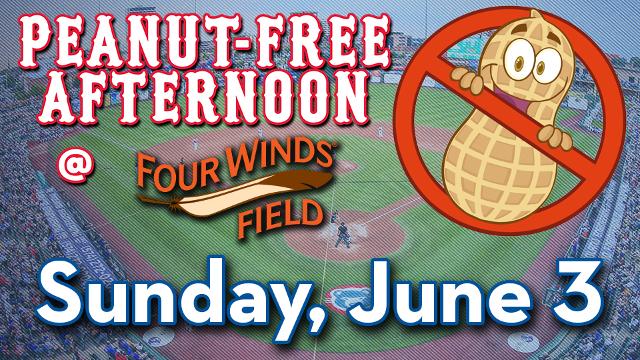 SOUTH BEND, IN – On Sunday, June 3, the South Bend Cubs will once again provide a peanut-free area located in the Owner’s Suite for fans and guests who experience peanut related allergies.

“I am excited that we are able to give fans with peanut allergies the opportunity to come out to Four Winds Field for a game this summer,” South Bend Cubs President Joe Hart said. “The last few years were a huge hit and we were able to provide a fun day at the ballpark that many people were not able to experience in the past. We want to make sure everyone has the opportunity to experience a South Bend Cubs game, so we will do whatever we can to make it a reality.”

“We always have strong attendance from fans at the peanut-free suite. I expect the tickets to sell out quickly,” Hart said.

The South Bend Cubs are the Class A minor league affiliate of the 2016 World Series Champion Chicago Cubs. Over the past 30 seasons, the team has won five Midwest League titles, most recently in 2005, and has captured 12 division titles. This year, Four Winds Field, home of the Cubs, was named Ballpark Digest‘s Best Single-A ballpark. In 2015, the team was named Ballpark Digest‘s Team of the Year and received the John H. Johnson President’s Award, the highest award in minor league baseball. The team is owned and operated by Swing-Batter-Swing, LLC whose sole shareholder is Andrew T. Berlin of Chicago, Ill.