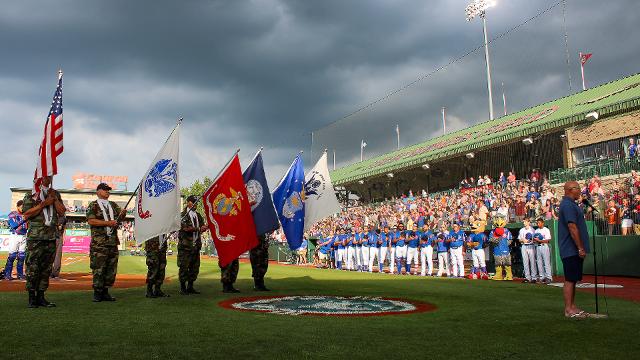 SOUTH BEND, IN – Auditions and applications are now being accepted for individuals and groups to perform the National Anthem at Four Winds Field prior to a 2020 South Bend Cubs home game.

All auditions must be submitted as a video. Audio files, tapes, or CDs will not be accepted. Videos will be accepted as a downloadable file, video link such as YouTube or Google Drive, or DVD. Videos can also be recorded on a mobile device. The 2020 audition form must accompany your submission. Performances of the National Anthem are not to exceed two minutes. All vocal auditions must be performed a cappella (no musical accompaniment). Instrumental performances will be accepted. Those who audition in groups must include all members in the audition video.

The last day to submit 2020 National Anthem auditions is Monday, March 2, 2020. Applicants are asked to submit their audition video via email or DVD by dropping off at the Four Winds Field main office. Once submitted, auditions will go through a careful judging process. Final decisions will be made in March and a member of the South Bend Cubs staff will reach out to those who have been selected.

The South Bend Cubs open the 2020 season at Four Winds Field on April 9 against the Lake County Captains. Opening Night will feature a special presentation celebrating the 2019 Midwest League Championship. Additional details on the celebration will be released in the coming weeks.

The South Bend Cubs are the Class A minor league affiliate of the 2016 World Series Champion Chicago Cubs. Over the past 32 seasons, the team has won four Midwest League titles, most recently in 2019, and has captured eight division titles. In 2019, the South Bend Cubs hosted the Midwest League All-Star Game. In June 2017, Four Winds Field, home of the South Bend Cubs, was voted Best Class A ballpark in the country by Ballpark Digest. In 2015 the team was named Ballpark Digest’s Team of the Year and received the John H. Johnson President’s Award, the highest award in minor league baseball. The team is owned and operated by Swing-Batter-Swing, LLC whose principal shareholder is Andrew T. Berlin of Chicago, Ill.