TinCaps, SU2C, and Fifth Third Partner for Game on August 20 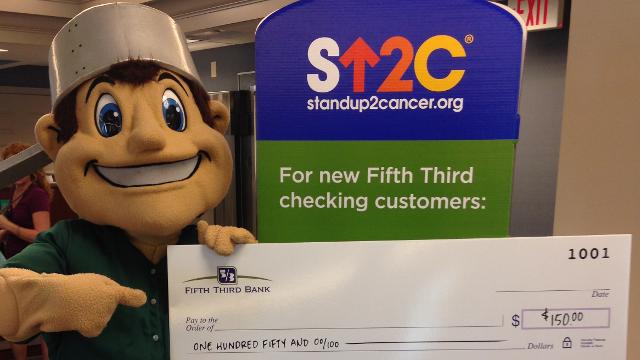 The TinCaps welcome all fans to help raise awareness and funds for cancer research during their game at Parkview Field on Wednesday, August 20 at 7:05 p.m. against Great Lakes for Stand Up To Cancer Night, presented by Fifth Third Bank. Since partnering with Stand Up To Cancer (SU2C) a little more than a year ago, Fifth Third Bank has donated nearly $2.3 million to help fund breakthrough cancer research and aims to help raise more money to fight cancer with the TinCaps.

Fans who attend that night can get in on the action as well. Fans will be able to take a photo of themselves with a SU2C check. Sharing that photo on social media with the hashtag of #paytotheorderof will result in $1 being donated to SU2C by Fifth Third Bank. Fans can also recognize loved ones by writing down the names of those affected by cancer on a large board that will be located on Parkview Field’s concourse.

“Stand Up To Cancer Night will be a very special night where we will be able to have a direct impact as an organization to do as much as we can to support cancer awareness and help fund cancer research,” said Michael Limmer, TinCaps Vice President of Marketing. “As a community we will be able to contribute to striking out cancer.”

On Stand Up to Cancer Night, the TinCaps will be wearing special jerseys designed by Cory Dold, a TinCaps fan who won the Fifth Third Bank Design-A-Jersey Contest. 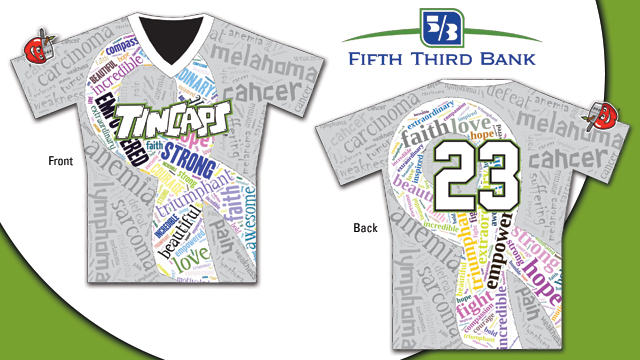 Dold’s design was inspired by his mother Kandy, who won her battle against breast cancer three years ago. The jerseys will be auctioned off during the game with donations to provide cancer awareness and support research.

Meanwhile, also during the game on Stand Up To Cancer Night, there will be a moment for everyone in the crowd and on the field to literally and symbolically stand up to cancer to show solidarity for all those who have been impacted by the disease.

“Fifth Third Bank is very proud of the great relationship we’ve formed with Stand Up To Cancer,” said Steven Alonso, regional president and CEO for the Greater Indiana Region. “Our Bank has always been focused on creating the greatest impact we can on the communities we serve. We are thrilled to be able to partner with the Fort Wayne TinCaps for Stand Up To Cancer Night at Parkview Field to celebrate our continued efforts to fund cancer research and encourage support for this tremendous cause.”

Prior to first pitch on the 20th, representatives from Fifth Third Bank will be recognized for the organization’s commitment to funding breakthrough cancer research for Stand Up To Cancer. For every strikeout a TinCaps pitcher records on that night, Fifth Third Bank will donate $250 to SU2C.

Additionally on Stand Up To Cancer Night, Parkview Health will be providing free Skin Cancer Screenings for both men and women. There will also be a men’s health event in the Lincoln Financial Events Center that includes PSA Prostate Cancer Blood Screenings.

For more information on Fifth Third Bank’s involvement with Stand Up To Cancer, visit their website.