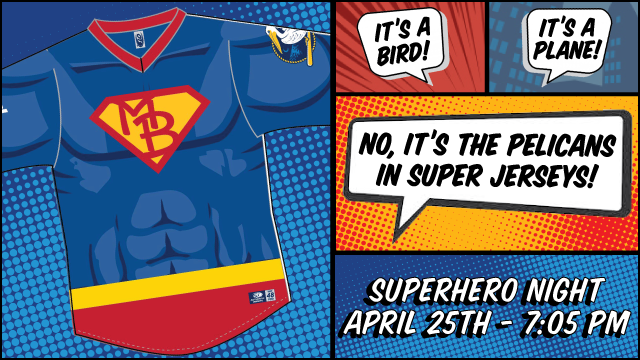 The Myrtle Beach Pelicans, the Class A-Advanced affiliate of the Chicago Cubs, will host the third annual Special Olympics Night in conjunction with Superhero Night as part of “Geekend” on Saturday, April 25 at TicketReturn.Com Field at Pelicans Ballpark. This season, the Pelicans will wear unique superhero-themed uniforms that will be auctioned off to benefit the Special Olympics as well.

Over the past two seasons, the Pelicans and the Law Enforcement Torch Run (LETR) have helped raise over $23,000 for the Special Olympics of South Carolina through the proceeds from this event.

In addition to raising money for the Special Olympics, the night also serves as a platform to highlight the Special Olympics athletes. The athletes will take part in a pre-game parade on the field, participate in a variety of on-field games and in-park promotions, and take the field with the Pelicans players at the start of the game.

Pelicans players and coaches will also hold a private meet-and-greet and autograph session with the Special Olympics athletes prior to first pitch.

The 2015 season marks the 17th season for the Pelicans franchise and first as the Class A-Advanced affiliate of the Chicago Cubs. For information on tickets to see the Pelicans in 2015, please call (843) 918-6000, e-mail info@myrtlebeachpelicans.com, or visit www.MyrtleBeachPelicans.com.