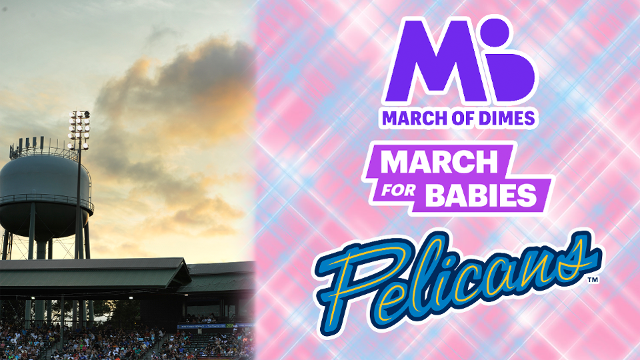 MYRTLE BEACH, S.C. (April 2, 2018) – The Myrtle Beach Pelicans will host the March of Dimes’ March for Babies beginning at 8:30 a.m. on Saturday, April 21 from TicketReturn.Com Field at Pelicans Ballpark.

March for Babies is a walking event that brings together individuals, families, friends and corporate teams to raise money to help the March of Dimes lead the fight for the health of all moms and babies.

The March of Dimes leads the fight for the health of all moms and babies, working in support of moms at every stage from preconception to post-delivery by funding research, programs and education. Money raised from the organization’s March for Babies will be a lifeline for the nearly four million babies born in the United States each year.

For more information about the March for Babies event, contact Coleen Sweatt, Development Manager, at 843-698-0873 or csweatt@marchofdimes.org.

The 2018 season will be the 20th season for the Pelicans franchise and fourth as the Class A-Advanced affiliate of the Chicago Cubs. For tickets visit MyrtleBeachPelicans.com/tickets, call (843) 918-6000, or visit the Pelicans Box Office.

ABOUT THE PELICANS: The Myrtle Beach Pelicans are the Class A-Advanced affiliate of the Chicago Cubs and play their home games at TicketReturn.Com Field at Pelicans Ballpark in Myrtle Beach, South Carolina. The park has ranked in the top eight in all of Minor League Baseball by Stadium Journey in six of the last seven seasons. The same publication also placed the Pelicans in the Top 100 Stadium Experiences and the best in the Carolina League for six of the past seven seasons as well. In June 2017, TicketReturn.Com Field at Pelicans Ballpark won the 2017 TripAdvisor.com Certificate of Excellence award. The Pelicans have won four Mills Cup Championships, including claims to back-to-back titles in 1999 and 2000, and again in 2015 and 2016. The Pelicans have made 11 postseason appearances behind 13 half-season Southern Division championships, including the first half of the 2015 season, second half of 2016 and first half of 2017. For more information on the Myrtle Beach Pelicans, please contact the Pelicans at (843) 918-6000 or emailing Info@MyrtleBeachPelicans.com.