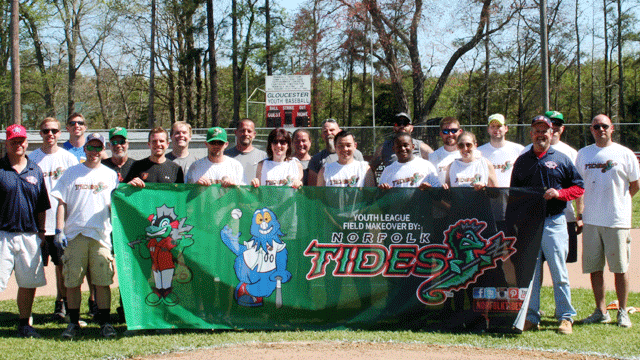 Members of the Tides organization helped renovate the Gloucester Youth Baseball field in 2016.

The Norfolk Tides today announced the return of a contest in which a local youth field will be renovated by Tides groundskeepers and front office staff. This field makeover will include an upgrade to the playing surface and an improvement to existing dugouts, with the recipient of the makeover being determined by a fan vote on the Tides’ Facebook page.

“Our entire organization looks forward to this project each year” said Tides General Manager Joe Gregory. “We’ve been able to extend a helping hand to many outstanding communities, and it’s a great feeling to know that we’ve made a difference in the baseball experience for so many children across Hampton Roads.”

Those interested in having the Tides make over their facility should submit a picture of their field to Heather McKeating at HMckeating@norfolktides.com. Along with the photo, fans are asked to include a brief description of why their league’s field should receive this enhancement. The deadline to submit this information is February 13, with online voting taking place on the Tides’ Facebook page from February 20 to February 24.

Volunteers from Safelite AutoGlass will join the Tides staff in assisting with the field renovation efforts, which will take place in April.

The Tides will play their first game of 2017 at Harbor Park on Friday, March 31st in an Exhibition Game against the Baltimore Orioles. Norfolk will then open its regular season on Thursday, April 6th with a 7:05 contest at Charlotte before kicking off the home portion of its schedule on Monday, April 10th with a 6:35 game vs. Gwinnett.

Season Tickets, group tickets, picnics and patios are currently available for the 2017 season. For pricing and additional information, visit the Harbor Park box office or call (757) 622-2222.