‘4 in 24’ kicks off a new season for the Community Grounds Crew, a partnership between the ‘Cats and BlueShield of Northeastern New York. 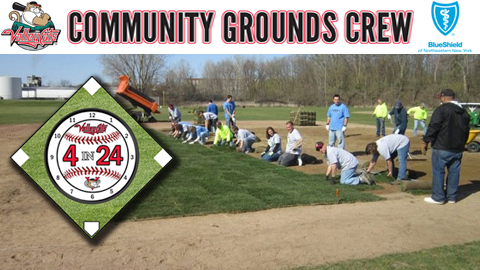 TROY, NY- The Tri-City ValleyCats are now accepting applications from youth leagues across the Capital Region for the 4th Annual ‘4 in 24’ youth field renovations. The renovations will take place in a 24-hour time period in early April 2014, as four chosen youth fields will have new sod placed on their infield while also seeing their pitcher’s mound and home plate areas rebuilt.

The ‘4 in 24’ is the kick-off event for the Community Grounds Crew, an expanded initiative with the assistance from BlueShield of Northeastern New York. This program will undertake additional projects and renovations on numerous other youth fields throughout the spring and summer.

“BlueShield is proud to continually support the ‘4 in 24’ Field Renovations,” said Brian O’Grady, vice president, BlueShield of Northeastern New York. “Year after year we see the positive impact these field renovations have on the children using the spaces and the community as a whole. Our company takes pride in encouraging children to learn the importance of making healthy choices, like playing and staying active, because we all know – Healthy Changes Everything.”

“With the continued loyal support of BlueShield of Northeastern New York, we are able to provide safe and well-maintained fields of play for the youth in our community, an initiative that is immensely important to us,” said ValleyCats Vice President/General Manager Rick Murphy.

Leagues interested in having their field considered for the ‘4 in 24’ or other Community Grounds Crew renovations must complete an application that can be found on the ValleyCats website, www.tcvalleycats.com. Leagues are required to submit photos of the field along with their application.

In order to be eligible for the ‘4 in 24’ renovation, applications must be returned by Monday, February 3. Those submitted beyond that date or not selected for the ‘4 in 24’, will remain in consideration for the Community Grounds Crew program, which will accept and evaluate applications on an ongoing basis.

The efforts of the Community Grounds Crew will be recognized at Joseph L. Bruno Stadium during the ValleyCats 2014 season. Youth leagues from across the area will take part in Youth Baseball Night tentatively scheduled for June 16 and Softball Night on June 24.

The ValleyCats’ field renovations have been an annual tradition since 2003 when the first field was officially renovated by the ‘Cats in South Troy, just one mile away from Joseph L. Bruno Stadium. Each year since, they have expanded upon its success.

Each project is also supported by the New York-Penn League Charitable Foundation. Contributions come from past events such as the Capital Region Craft Brewers Festival, hosted by the ValleyCats and Brown’s Brewing Company, and two corporate baseball tournaments that take place at “The Joe” including the Battle of the Beverages and the Capital Region Series.